"Holy Sexuality and the Gospel" by Christopher Yuan - Book Review

Years ago I met Dr. Christopher Yuan for the first time. I was at a denominational convention where he and his mother had a booth set up to promote their ministry and book Out of a Far Country: A Gay Son's Journey to God. At the time, I was intrigued by the brief introduction to them and their story. Little did I know that my wife and I would be experiencing similar circumstances when our son expressed to us that he identified as gay. It was during this time I contacted Christopher and invited him to speak at our church. All in our family were encouraged by his message of hope. Christopher shared his personal story along with his parents during our morning worship service. That evening he led two seminars related to Christianity, the church, and LGBTQ+ individuals. It was during his presentations that I first heard Christopher use the term "holy sexuality." He used the term in his first book as well. This term is more than just another evangelical buzzword. As Rosaria Butterfield has said, this term is "a concept that changed the paradigm of what it means to live out God's best for us." 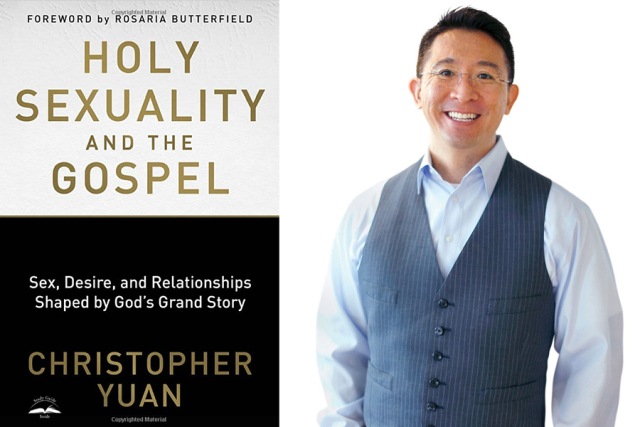 Just a few weeks ago, I received an advanced readers copy (ARC) of Christopher's newly released book Holy Sexuality and the Gospel: Sex, Desire, and Relationships Shaped by God's Grand Story. I began reading and found myself highlighting phrases and paragraphs on almost every page. Dr. Yuan unpacks so much related to sexuality. While he addresses LGBTQ+ identifiers, his book is not focused solely on these. Sexual sin, whether homosexual or heterosexual is sin. Yuan states...

We cannot properly understand human sexuality unless we begin with theological anthropology. Anthropology, in general terms, is the study of humanity. Essentially, it's the human search to answer the important question Who am I?

All our thoughts and actions are influenced at some level by how we answer the question Who am I? This suggests a closer relationship between essence and ethics than many realize. The two inform each other. Who we are (essence) determines how we live (ethics), and how we live determines who we are.1

Dr. Yuan's solid emphasis on the gospel and identity as bestowed by God presents a firm foundation for the book. As an HIV+ man who had for years lived sexually promiscuous as a gay man, was a self-described partier and drug user, and eventually went to prison for dealing drugs, Yuan does not speak as one who views sin as superficial or overly-simplified. He writes and speaks as one who has been in the pit, experienced an undeserved rescue, and continues to live amazed at the grace and mercy offered from God. The main character in Dr. Yuan's story is not himself, but God.

Some have declared Yuan's perspective on anthropology or ontology to be flawed. I have read declarations that he misuses data and scientific proof. Others who identify as LGBTQ+ see Dr. Yuan as a sell-out or a betrayer. The negative reviews of his books mostly feign to be intellectual analyses, but often reveal a personal vitriol against Dr. Yuan based on his current message and lifestyle.

Yet, for those who have actually read Yuan's writings (not just the two books here, but also his second book Giving a Voice to the Voiceless: A Qualitative Study of Reducing Marginalization of Lesbian, Gay, Bisexual and Same-Sex Attracted Students at Christian Colleges and Universities) or heard him speak, it is clear that Dr. Yuan is not playing fast and loose with science, research, or historical aspects of biblical Christianity and sexual ethics. His revealed research and intelligent insight debunks any theory that he simply bases his beliefs on conservative, biblical talking points or Twitter-size hot-button phrasing. Does Dr. Yuan have a personal agenda? Absolutely. Every author does. Every Christian does. Dr. Yuan's agenda is not to harm others at all. His agenda is revealed in his writings clearly. It is simply to declare the message of the gospel well, unapologetically, without compromise, and fully in love.

On a practical level, Dr. Yuan's latest book on holy sexuality should be read by any evangelical pastor seeking to minister well to those in the church or community desiring to better understand their LGBTQ+ friends and relatives without abandoning biblical fidelity. He addresses the reality of loving without affirming. For those who do not believe their friends or church families are impacted by this reality of culture, it is time to wake up. Many pastors would rather just not address these issues. Some who have done so end up doing more harm than good, that is certain. For pastors seeking to ignore the very real questions being asked by those self-identifying as gender fluid or any one of the many letters being expressed by the common LGBTQ+ identifier (or their loved ones) the fact is clear - you cannot remain silent. Your silence speaks loudly.

Dr. Yuan's book is not only informational related to the biblical understanding of sexuality, but relatable, insightful, and practical. The included study guide provides real-life questions that can be addressed in small group studies. These all point to biblical answers and are firmly rooted in the gospel and a biblical worldview.

I agree with Rosaria Butterfield who stated in her review that this book is the "most important humanly composed book about biblical sexuality and godly living for our times."

I encourage every Christian with a loved one identifying as LGBTQ+ to read this book. I encourage every single adult Christian (heterosexual or same-sex attracted) to read this book to better understand the very real concept of holy singleness and holy sexuality. In addition to Dr. Yuan's clear and correct take on holy sexuality, his focus on the value and role of those whom God has called to singleness within the body of Christ is powerful and needed. He addresses head-on the idolatry that has overtaken some within the Christian church regarding the false elevation of marriage as essential for spiritual maturity.

There's more to unpack here, but for sake of space, I will end with "Read this book! It is needed and valuable."

The book is available at these sites and more: Amazon, Barnes and Noble,  CBD.