davidtarkington.com
Home Archives Subscribe
"Holy Sexuality and the Gospel" by Christopher Yuan - Book Review
What Do You Know About That New Church Down the Street?

Garth Brooks, Notre Dame, and Your Christmas Service at Church

Last night while the big game for the NFL was broadcast on NBC and Hallmark was showing yet another Christmas movie, a country music superstar came out of self-imposed semi-retirement. The Garth Brooks Stadium Tour has begun and the concert recorded in the rain at Notre Dame Stadium in South Bend, Indiana in October aired on CBS last night. The production quality of Brooks' concert was incredible. He has been known for his live shows since breaking onto the scene over two decades ago. While other country singers would stand behind a microphone in their starched Wranglers while playing guitar and belting out hits (George Strait, Alan Jackson, et. al.) Brooks would wear the wrap-around microphone that he must have either borrowed from Madonna or the Drive-Thru worker at Chick-fil-A, run around the stage or at times, pull a Bon Jovi and fly above the crowd. Brooks is an entertainer for certain.

Whether you like his music or not, there's no denying he has appeal for many. The stadium was packed. It was raining. It was cold. And while I know that post-production can do some pretty amazing things, based on tweets and reports online from those who were in attendance, plus what was seen on television, the crowd LOVED the show. 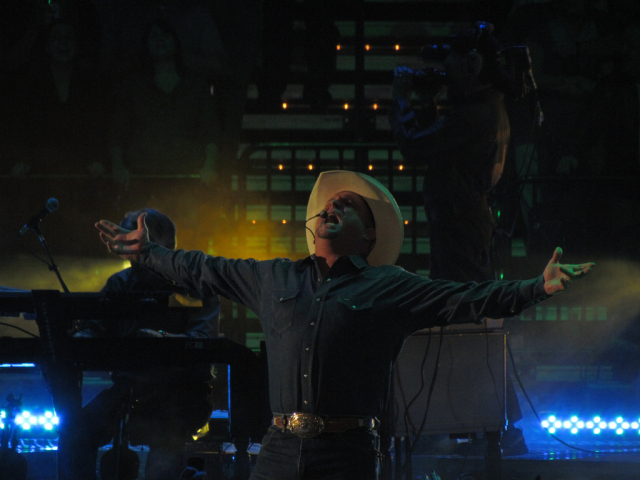 So, what does this have to do with anything related to church, Christianity, worship, or anything else spiritual?

While watching last night, I said to my wife "Brooks has the crowd in his hand. He's no evangelist, but he's evangelizing and the crowd is 'amening" their approval." I followed up with "If he asked people to come down front to make a decision, they'd come in droves." This was not a condemnation on crusades or the traditional "come down the aisle" moment in many churches. I was just noting that what we were observing in this very well produced event was something that we have seen in religious settings as well (albeit with fewer people in the crowd.)

My friend and pastor of City Church in Tallahassee, Dean Inserra tweeted as the concert was completing:

Lessons to learn for the church from Garth Brooks concert on tv:

-People like to sing songs they know.
-Good songs don’t get old.
-You don’t have to be a top shelf singer to lead people in song.

Dean hit the nail on the head in this comparison.

Some of you reading will be upset that I, a Baptist preacher, may seem to be condoning the message or lifestyle promoted in Brooks' songs. Well, I'm not. However, I do know the words of many of the hits he played. I like some more than others. Yet, you would be hard pressed to find anyone who actually has a radio in their vehicle, an iTunes or Amazon Music account or who has been alive for the past twenty years or so who does not know at least some of the words to "Friends in Low Places."

No I do not recommend singing "Callin' Baton Rouge" at your Christmas Eve service. Yet, I do find some insight from this event that was on television last night. Spurred on by Dean Inserra's tweet, I recommend the following to pastors who are trying to find ways to connect with their communities during this Christmas season.

What you don't need to have an effective Christmas service is the production budget of Garth. Don't be who you're not and don't fret that you don't have unlimited resources for smoke machines, lighting, or other effects. If you have those things, that's fine, but those are not the point when the true focus is clear.

So this Baptist preacher learned something from a country singer with hits about drinking, cheating, dancing, and a false narrative about prayer while performing on stage with a man dressed as a leprechaun at a Catholic university.