davidtarkington.com
Home Archives Subscribe
Grieving For and Reaching the Lost Person in Your Family and Church
Why "Family-Equipping Discipleship" Is Needed Now More Than Ever (And Is Better Than What We Grew Up With)

As Southern Baptists, We Aren't Even Reaching and Keeping Our Own Kids

Numbers and statistics can be grueling. Just ask anyone (like me) who moved through two semesters of statistics in college and more in graduate work. The values are vital and helpful, but can become overwhelming. Also, apart from good statistical procedures and analysis, numbers can be misleading, if not totally wrong. That is why I read through articles as carefully as possible and seek to discover where the numbers were gathered, if there was a large enough sample to make the statements being made, and if the information is helpful or simply click-bait for more articles.

As a Southern Baptist pastor who has been leading our church toward a family equipping model of ministry, any story that speaks of losing the next generation always piques my interest. Based on information from the Annual Church Profiles (ACP) (viewable here) provided by participating Southern Baptists, a downward trend in certain areas of categorization continues. For those who are not Southern Baptist, it should be noted that the ACP is provided voluntarily by member churches. Not all churches submit the report and to be honest, not all reports submitted are accurate. A question may be asked to signify the number of attendees in worship weekly. If the church does not do a systematic count each week of people in the room, save those numbers, and then average them, most often the individual filling out the form will simply make an educated guess. The number may be close, but likely not accurate.

Yet, when it comes to baptisms, the numbers are most often accurate. As Baptists, we count those baptisms. We really don't have a metric to count disciples (unless we simply count those attending classes, study groups, and serving on mission) so we count baptisms. Those numbers have gone down as well. The most troubling of the baptism numbers is not the downward trend, but that the only growing or consistent age bracket of baptisms is that of toddlers (five years old and younger) in our churches. For a denomination that affirms believers' baptism, the toddler baptism numbers reek of little more than pedobaptism. Likely, many of those young children who were led in a prayer will struggle with their faith later in life and hopefully will come to Christ at a later age and then truly be baptized biblically. Of course, that means we have one individual being baptized twice (it happens more than you think) and for our overall numbers, that's multiple baptisms of the same person over the course of time.

You see why these statistics are a bit muddy?

Nevertheless, those numbers are troubling, but this headline from a recent article published by Christianity Today caught my eye. 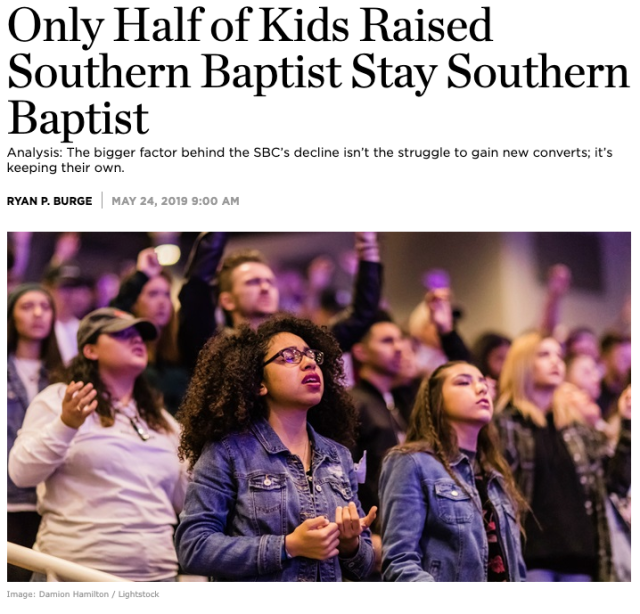 It sadly did not surprise me. Not only have I been pastoring for decades and have seen this, but I am also a parent of two adult children. Statistically speaking, in my own home, we have only seen fifty percent of our children remain faithful in the church.

Rather than repeat all the article states, you can either click the image above or here to read it in its entirety.

According to the data here, the numbers seem to give a good representation of the trend. Just looking across the congregation I pastor, knowing that many of the fifty and sixty-year-olds have adult children who were very active in children's and youth ministry programs years ago, it is hard to debate the veracity of the numbers.

Simply put - an active youth group does not always lead to an engaged church of adults years later.

Some, it must be noted, do move from Southern Baptist churches to non-denominational churches or those who align in different denominations. Those as well as the defectors are counted as the half that leave. The fact is this is a reality that Southern Baptists (and I'd say many other denominations) did not face forty or fifty years ago.

But, as they say, times have changed. The sad reality is the model of family ministry in many churches has not.

The article draws me in, but the lamentations end as I see the call to equip families as disciple-makers as God's original plan for reaching, growing, and keeping the next generation (not just in one's local church, but in God's church wherever the zip code may be.)

Most often when statistics like this are seen, excuses are offered as to why things are the way they are. In local churches when empty pews awaken the aging congregation to the reality of the absent generation, they often seek to push more money, create new ministries, and a new hire of a minister to "fix the problem." We should know by now, that is not the answer. That has never been the answer. It's been done many times...and we are where we are.

It is this time of year when we recognize our next group of high school graduates in the church. It is a celebratory moment where families come together intentionally to honor their child. My challenge to these students will be that they not take the path previous graduates have in our church. I encourage, challenge, and plead that upon their graduation from high school they do not also seek to graduate from church. Many have in the past and our last memory of them gathered together with the covenant members of the church has been when they wore their cap and gown and stood on the stage to be recognized for their achievement.

We are coming alongside parents to change that. I wish the church had done so this way when my child was younger.

I'll write more on our strategy of making and keeping disciples alongside parents of children and teenagers soon.