davidtarkington.com
Home Archives Subscribe
Maneuvering Through the Politics of the Age Without Embarrassing Christ
So That's Why They Asked That Question - Pastoring a Church Healing From Sexual Abuse

The oft-quoted phrase "Reports of my death have been greatly exaggerated" is attributed to Mark Twain. While actually a bit of a misquote from what Twain actually stated, the gist is correct.

When it comes the Southern Baptist Convention (SBC), it is no secret that statistically we (I am a Southern Baptist pastor) do not have the numbers of members, new converts, and attendees that we once did. Much has been written about this. One of the best was recently penned  by Dr. Albert Mohler (read it here.)

Normally, the SBC becomes front-page fodder for the news media during our two-day annual meeting.

We are meeting in Birmingham this week. The news media has produced stories and reports as they do annually. However, this year the focus has been on the state of the SBC and current challenges surrounding sex abuse by clergy and church leaders as revealed in an expose by Robert Downen of The Houston Chronicle. (I wrote of this in an article posted on February 12 here.) While some have lamented the publishing of the Downen article, the truth is that these reports needed to be revealed and stories of sinful actions by those who served in God's local churches needed to be exposed. Though painful, truth is right and Scripture affirms the reality that sin will be discovered when the light is shone.

In addition to the issues revealed in The Houston Chronicle, other stories and issues began to appear in other venues.

As preparations for this year's gathering came closer, stories spinning in social media and other media outlets, blogs, postings, and other public venues made it seem, depending on what you read, that the SBC was harboring sex offenders, didn't care for abuse victims, hated women, hated each other, devalued the Lord's Day, was little more than a political puppet for the GOP, financially suspect, racist, social justice warriors, or the opposite of most every one of those.

If you look close enough, you may find a Southern Baptist that matches each of the descriptors above. I'm not defending that reality, but stating the obvious.

However, there is a big difference between the online version of the SBC as seen in social media posts and blogs, and the actual face-to-face SBCers who worship together, meet together, and even debate one another in person as we are seeing this week. No, the SBC is not perfect. We have many chapters in our history. Some of those we wish did not exist. Nevertheless, they do, and to ignore the bad chapters leaves us to repeat them, or relive them in some ways. We pray never to find ourselves in a chapter that dishonors our Lord and will be regretted by our godly children and grandchildren.

I do not have a set of rose-colored glasses. I am not an idealist. I sometimes do not see things others do, but just because I cannot or do not see those things does not mean those are not real. This is not a "your truth/my truth" thing. I reject that. This is just a clarification of perspective.

This means that I know there are some bad spots in our SBC that need to be corrected. There are systems in place that likely worked well decades ago, but need to be reworked. I'm not speaking of doctrine. I am thankful for the work done by God in the SBC through the Conservative Resurgence (NOTE: I appreciate the people who were instrumental in the resurgence, but must give the credit not to man, but God. He orchestrated the shift and empowered it. To him alone goes the glory.) I believe our Baptist Faith & Message (2000) is a solid confession of faith and belief.

Nevertheless, we are an imperfect people seeking to serve our perfect God.

In our imperfection, we seek guidance, healing, and direction for next steps.

I believe the steps taken by SBC President J.D. Greear, our Executive Committee, our Ethics and Religious Liberty Commission, and the new teams and committees formed to address the sexual abuse issues among our member churches are the right steps. I do not envy the teams that had to work out the language used and the machinations needed to uphold church autonomy while refusing to hide behind that statement to keep from moving forward. The work done and presented this week to the messengers in attendance is godly, right, and needed.

However, it likely is not enough. We all know that. A statement does not heal a wound. A finely wordsmithed document does not fix the past. We know this. I believe we all (or at least most) know this. Yet, this is the right step for now. More steps will be taken in days to come. Prayerfully, healing will come for the hurting ones as well.

Is the SBC done for?

I don't believe so.

The decline is real.

The broken pieces are laid bare, and yet there is hope. Hope not in the repairing of a brand. Hope in the rescue of people from the grips of sin. Hope in Christ alone.

Today at the close of our afternoon session, our International Mission Board presented men and women who have committed their lives to serve the Lord on mission for the sake of the gospel. Single women and men are preparing to go serve those in other nations who have no one to tell them of Christ. Young couples are moving to areas that cannot even be mentioned for safety reasons. They're taking their small children, leaving grandparents and safe homes in subdivisions to go to the uttermost parts of the world. They are willingly going to attend language classes so they may best communicate the truth of the gospel. They want to be obedient and they are taking that step. One couple, recently retired from the mission field and back in the US have said "YES" once more to go overseas. So much for that calm retirement. 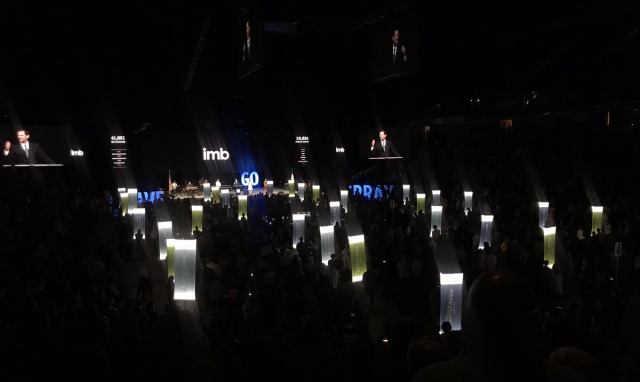 I was in tears as the testimonies were shared and the commissioning service continued.

There is much going on throughout the SBC and if you only read tweets and posts, you may miss the real story.

I recognize, as some have tweeted, that the IMB has had their (well...our) own share of abuse issues. No excuses. Prayerfully, steps have been taken to ensure nothing happens like that again. If it ever does, then I pray that proper consequences come and proper care for the victim as well. I pray this is true not just for the IMB, but for all our agencies and especially our local churches.

The SBC is a strange version of denomination. In a sense, it's not even really a denomination, but we use that word for lack of a better one for the masses. Just try to explain our autonomy and organizational structure to someone who did not grow up SBC or grew up in a mainline Protestant or Catholic church and you will see what I mean by strange.

Yet, in our strangeness, there is good, despite ourselves. The good of the SBC is not founded in the SBC, but in God alone. I believe that we do have great days ahead. I do believe that God is not finished with the SBC. I know he is not finished with his church. May we remain faithful to Him, and live out the greatest commandment to love him with all our heart, soul, mind, and strength and love others righteously and in holy manners so that they may know him as well.

The reports of the death of the SBC have been greatly exaggerated. But...this is not really about the SBC.

It is the Gospel...above all.