davidtarkington.com
Home Archives Subscribe
The Shaming of Purity and the Falling of Christian Leaders
No, You Don't Have a Right to Join the Church

Hope in a Culture Defined By Hate

"It has never been this bad" is a statement of despair that I have heard from numerous people over the years.

This cry echoes in our culture once again as we hear of the mass shootings in El Paso, Texas and Dayton, Ohio. These evil actions of two individuals (with seemingly unrelated motivations) have brought cries from various corners of society for fixes. Political pundits and creators of sound bites and spin have once again taken center stage in order to state their cases.

While cries of action come from some, cries of grief continue for family members and friends who are now planning funerals.

It is bad. There is no question that these events are terrible, horrific, and evil. The loss of life, even in a desensitized culture, is always tragic. It is even more tragic when deaths are not the result of accidents or illness (though those are tragic as well) but at the hands of deranged criminals.

Thus we hear "Woe is us. It has never been this bad."

From a Christian perspective, we know the story of sin. We not only know it historically, but we understand it personally. Thus, the need for a Redeemer.

The Enemy hates God. His hatred is revealed clearly in the Genesis account of the Garden of Eden. His hatred for God is played out upon God's image-bearers, Adam and Eve. Sin enters the human story and separation from God results. Even so, in this separation, the love of God remains. It always has.

Shortly into the story of the first family, hatred between brothers is revealed as Cain kills Abel.

The account of Noah is more than just a story about a large boat and animals. The destruction of humanity (except for Noah and his family) was due to the hatred and wickedness within the hearts of man.

The human story continues with wars, attacks, jealousy, and hatred. The Scripture is replete with these accounts. Thankfully, Scripture also reveals the amazing love of God for those who, by nature, hate him.

It does not take long to develop a list of heinous, hateful actions perpetrated throughout history. Globally, there are numerous accounts of terrible actions done against others. Sadly, in many cases, these have been done under the guise of religion or nationalism.

In our short history of the United States, we have more incidents than could be listed here.

Today, we face the reality of hateful actions perpetrated against seemingly innocent victims. In the case of the El Paso shooter, a manifesto has been found where he (Patrick Crusius) expresses his motivations and warped reasonings for driving hours from his home in Allen, Texas to the border-town of El Paso in order to murder and create mayhem in a local Walmart. His "manifesto" does little to provide insight as it presents little more than what has been stated for generations by those whose dark hearts see other image-bearers of God as enemies to be eradicated. 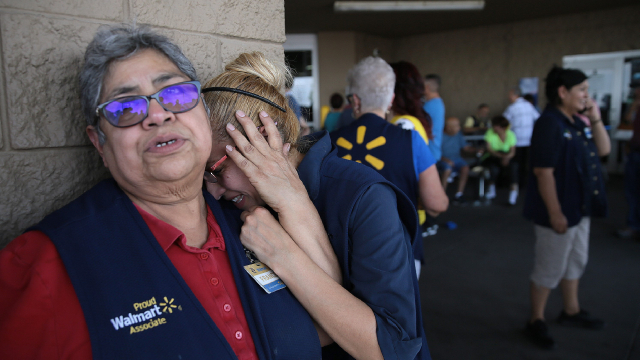 Crusius's actions have been described as "white terrorism" and that is not an incorrect assumption. There are some who would claim the color of his skin to not be relevant (though this is often only an argument when the criminals are white), but the fact is that in this case and others (Charleston for example) the declared reasonings for the attacks have much to do with old fashioned, sinful white supremacy and self-declared racial superiority.

"It's never been this bad."

Hate is an equal opportunity offender. The "manifesto" from this killer seems to place him in contradictory and opposed camps so that all can be claimed, or disavowed, as the case may be. Pastor Bart Barber from Oklahoma stated it well in this tweet...

From the manifesto, it appears that the gunman is as racist as George Wallace, as anti-immigration as Peter Brimelow, as green as AOC, as anti-corporation as Ralph Nader, and as pro-gun as Charlton Heston—a strange blend of angst and polarization that gives something to everyone.

Perhaps it is not the worst it has ever been, but with the shrinking of the world through instant information via the internet and social media, polarization has seemingly increased.

Evangelical Christians are not immune to this polarization. This has become more evident than ever since the 2016 presidential election. Nevertheless, the polarization politically, ethically, morally, and communally did not begin then. It just seems more prominent.

Of evangelicals with an opinion, 82 percent believe that since the 2016 presidential election, groups within the Christian church have become increasingly polarized on issues of politics. (Ed Stetzer, Christians in the Age of Outrage, p. 5)

You may say that the incidents in El Paso and Dayton are not political. I disagree. In the current culture, everything is political. Even the "manifesto" presented by the El Paso murderer references this.

The divisions among Christians were not created by a political win or loss. However, 73 percent of evangelicals believe that in the just the past few years, long standing divides hidden for years within "religious-speak" and "church-talk," have become more evident. (Christians in the Age of Outrage, p. 5.)

I believe that the current climate in our nation has not worked to quell the latent anger (often based on fear) among many, but has been used by the enemy to fuel the feelings of despair, frustration, and ire.

People are being played. They are being manipulated and tempted by the same enemy of God who spoke first to Eve and offered the concept that God was holding out on his image-bearers and was not to be trusted. Individualism and self-defined "fairness" became a key to rebellion.

When I first read the news of the El Paso shootings, I was grieved. I knew it would not be long before "experts" began posting well thought out opinions on why this terror occurred. In many cases, they proffered fixes that were centered on legislation and political action. Then, statements regarding immigration, border walls, legal citizenship, etc. developed. These were often lead-ins to harsher opinions. Posts and statements turned south. The racial heritage of the victims and the Spanish-speaking, Hispanic, Latino culture was to blame for the attacks. Some even saw a justification for the acts based on certain beliefs related to race, laws, immigration, etc.

Before you begin posting responses understand that I am not writing this post with intent to enter into a discussion related to political parties, immigration laws, citizenship procedures, walls, or anything else that has been and remains as front-page fodder for those in Washington and beyond. I believe each of those subjects is legitimate and wish that level-headed, wise, humane, and constitutional conversations among lawmakers and influencers would occur (some have) and will lead to resolution.

This article centers on the very real hatred that was evidenced in the shooter in El Paso (and likely in the shooter in Dayton as well.) The shock of the attack hit hard. Being in a Walmart moved many Americans to realize "It could happen where I live."

The answer is the same it has always been.

The good news is that the answer and the healing for this hate, fear, emptiness, and lostness is the same God that we read about in Genesis. It is the good news, the gospel message, that Jesus Christ has come to redeem us. He took on all the sin, all the hate, all the evil in the history of humankind. He died...and so did the sin debt owed. He rose again. Through this glorious reality of resurrection, we can live too.

Church, we grieve with those who grieve. We lament the realities of evil in our world and the impact on the seemingly innocent. We sometimes throw up our arms and wonder where God is (the psalmist did this often, so we're in good company.) The answer we receive is the one we have known all along. God has not abandoned us. He is here. He is hope. He is the healer of the broken-hearted.

In the midst of tragedies where evil seems to be winning, let's remain true to the calling which we have been given. Let us remember well that all is not lost.

But we do not want you to be uninformed, brothers, about those who are asleep, that you may not grieve as others do who have no hope. For since we believe that Jesus died and rose again, even so, through Jesus, God will bring with him those who have fallen asleep. 1 Thessalonians 4:13-14 (ESV)