davidtarkington.com
Home Archives Subscribe
How You Teach the "David & Bathsheba Story" May Cause Harm
Christians, Depression, and Mental Illness

"What Is A Girl Worth?" by Rachael Denhollander - Book Review

In 2016 after the IndyStar ran an exposé on USA Gymnastics (USAG) and how the organization turned a blind eye to sexual abuse perpetrated by coaches for years, a young woman in Louisville, Kentucky responded. She sent an email to the writer of the story stating that it was not just coaches, but one of the premier doctors for USAG who was also an abuser. When this email arrived at the IndyStar, it was soon answered by the reporter responsible for the story. It was at that moment Rachael Denhollander stepped out of private life and began the journey to become whom BBC News called "the five-star general in the army of survivors."

Rachael Denhollander, a wife, mother, attorney, former gymnast, and survivor of sexual abuse by Dr. Larry Nassar stepped into the public eye and became the voice for hundreds of women who had been victimized sexually. In many cases, these women felt they had no voice. Sadly, some felt they were to blame for that which was done to them.

The last few years have been a whirlwind for Denhollander, her family, and the other survivors. After a long, tedious, painful, and revealing journey of testimonies, interviews, and trial dates, the battle against a culture that often protects and enables abusers continues.

Yet, there has been victory–great victory. In January 2018, Larry Nassar was sentenced to prison for his crimes. The victory is that the voices of these victims survivors were eventually heard.

The battle continues because the reality of systematic, ignored, and enabled sexual abuse continues in our nation. It continues in organizations (businesses, schools, churches, etc.) where protecting the brand is more important than protecting people. It continues in states where laws designed to bring abusers to justice often do not have enough teeth to actually provide help for the abused. It continues in communities where subtle statements such as "Well, did you see what she was wearing?" and other heinous statements point the blame at the victims rather than the victimizers. It continues in a world where the depravity of sin remains and the only hope for true healing is through repentance and total surrender to Christ.

I was given a copies of Rachael's soon-to-be-released books for review. 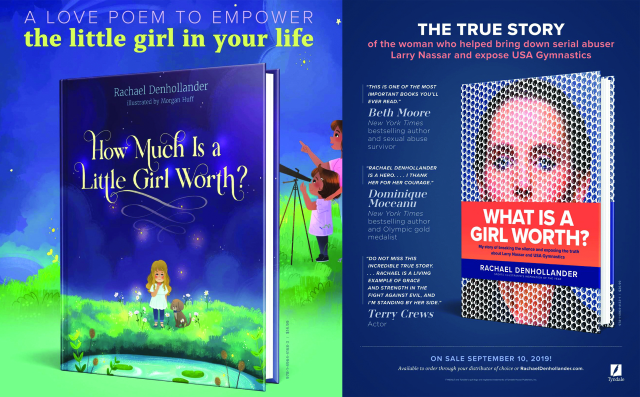 How Much Is a Little Girl Worth?

One book is written for parents to read to their little girls. How Much Is a Little Girl Worth? is a beautifully illustrated (by Morgan Huff) storybook showing images alongside a poem written by Rachael. I haven't read books written for little girls in a very long time (my daughter is now in her mid-twenties) but as I read this I could clearly sense a mother's love for her daughter throughout. I shared this with the preschool and children's ministry leaders in our church and they stated that every parent of little girls should have this. It declares clear messages intended to be preemptive strikes against the enemy's attack on a girl's identity. The world is a dangerous and a girl's identity is often attacked early, and continually. This portion on page 23 is a great example of the focus...

Your value is found not in what you can do

Or the things you accomplish and win.

It is found in how you were made, precious girl–

Created and cherished by Him.

What Is a Girl Worth?

What Is a Girl Worth? is the autobiographical account by Denhollander giving insight into her upbringing in Michigan, her desire to become a gymnast, and her eventual meeting with Dr. Larry Nassar at his Michigan State University clinic following an injury. Rachael's writing is clear, and narrative. The reader is quickly brought into her world and can begin to see how she transitioned from an innocent young teenager just wanting to become a gymnast to a young woman who, by no desire of her own, had to become the voice of silenced ones who have suffered abuse.

The reader gets a first-hand view of the fear, frustration, risks, and reality of life that Rachael and her husband Jacob faced. For those who followed the story once it became a media firestorm, there really is no spoiler. Just as those who watched the film "Titanic" knew the ship eventually sunk, the readers know that Larry Nassar was eventually convicted. Yet, while reading (even knowing the outcome) there is a sense of nervousness and a need to turn the page to get to the next portion just to see how the next phase of the account plays out.

It is almost as if you want to read the book as quickly as you can just so you can be assured that Nassar gets convicted. You know he does, but Rachael's writing makes her story personal for the reader and suddenly, even if you never have personally been victimized sexually, you begin to hurt with those who have and want their voices to be heard.

I believe Rachael begins her book with the very best opening line she could have.

In this age of #MeToo and #ChurchToo, I have heard many say similar things. Every accusatory statement made for those bold enough to speak about their victimization is referenced in Rachael's book. Suddenly, you discover how easily (maybe unknowingly) people accuse the accuser rather than believe the harmed.

I have highlighted many portions of the book. There are numerous statements that stood out and made me think more clearly on the issue of sexual abuse and victimization. Here are just a few:

I couldn't choose what had happened, but I could choose how I responded. (p. 87)

Church wasn't safe. Nowhere was safe. (Related to how her Bible teacher chose to teach the David & Bathsheba story plus bringing up an abuse issue in her life that occurred in her church. p. 90)

I noticed that fellow Christians pretty much talked only about our need to understand the wrong things we'd done. No one talked about God's supposed hatred for the wrongs done against us. (p. 99)

The dynamics survivors have to navigate just to be heard are no-win situations. (p. 157)

"Little girls don't stay little forever. They grow into strong women that return to destroy your world." - Kyle Stephens, abused as a little girl by Larry Nassar while addressing him. (p. 298)

The book is filled with such nuggets of truth and clarity.

The phrase that Rachael puts in the book numerous times, as a reminder of her upbringing, her faith, and her resolve is "The more you love, the harder you fight." This is why she persevered and why she was called the "Five star general" of this army of survivors.

This book is a systematic account of how God brought Rachael through her pain to be used by Him for His glory and the very good of many other women. It is also the story of how her own wounds found healing as God brought her husband Jacob into her life. I told my wife that the book is a combination of a legal thriller, a sports story, a battle between good and evil, with just a little Hallmark movie in the middle (Chapters 11 & 12).

Denhollander is a Christian and her book is replete with messages related to biblical truths such as sin, grace, forgiveness, true love, and justice. While Christians will connect well with these stories, even non-believers will be able to relate. In other words, while What Is A Girl Worth? is not a "Christian book" (I'm not sure books can become Christians) it is a book written by a Christian and since one's Christianity is not something that can be turned on or off, biblical truths resonate throughout.

In addition to the pointed story regarding USAG and Larry Nassar, there is a subtext related to the Denhollanders church and how sexual abuse among God's children is often addressed wrongly. Sadly, this was their experience, but as stated in the final chapters, God has brought healing there as well.

I highly recommend Rachael Denhollander's books. For those with little girls, the storybook is a must buy. The autobiographical account in the adult book is for all who have been victimized, know someone who has, or is part of an organization or institution (church, team, business, etc.) that could easily be positioned to protect the "image" of the organization rather than the image-bearers of God within. It is a must read. It will challenge you. It will grieve you. Hopefully and prayerfully, it will be used as a catalyst for change so that other little girls don't find themselves taking the blame for horrendous acts perpetrated on them.

How much is a girl worth? They are infinitely worthy.