davidtarkington.com
Home Archives Subscribe
Why We're Cancelling Youth Group
Striving to Care Well in Our Church (And Not Allow the Emphasis to Be Another Program)

How Deep Is This Caring Well? Addressing Sexual Abuse in the Church

Last week my wife and I traveled to Dallas, Texas for the 2019 SBC Ethics and Religious Liberty Commission (ERLC) National Conference. As a result of the February 2019 exposé in the Houston Chronicle regarding sexual abuse in Southern Baptist Convention (SBC) churches, the focus of this year's conference what changed to address the issue directly.

Some have asked us how we liked the conference.

How can you like a conference that is focused on addressing such heinous crimes and sin?

Well, we did like it because a very real issue was being addressed. It was "good" that no longer were we intentionally or subconsciously ignoring victims of such abuse. Yet, sin is never good. This left us with an overwhelming feeling of sadness, grief, and lament. 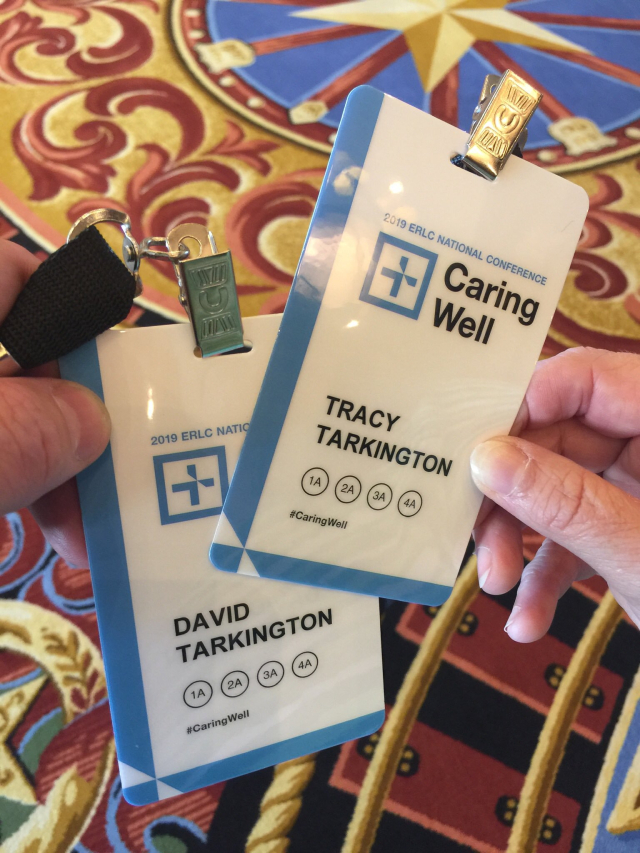 From a perspective as a pastor in an SBC church, I knew that focusing on such instances was considered by some to be a risky endeavor. For those who were asked to speak, it was clear that ERLC and SBC leaders did not tell them to hold back. It seems that they were not even asked to avoid certain subjects or people. In this era, that was refreshing.

If you followed the #CaringWell trending hashtag online, you likely saw many comments related to the conference. Some were supportive. Others were cautiously encouraged. Still others were angered that the event was even occurring. Of those angered, they constituted varied perspectives.

On one end were those who fear acknowledging that such abuse even occurred in their (our) churches, seminaries, and institutions and to speak of them would tarnish the SBC brand and image. (News flash: It's already been tarnished.)

On the other end of the spectrum were those who have been victimized by church leaders or others in power (even if in smaller churches) in the past and were appalled that such an event would be sponsored by an agency of the SBC. It seemed, according to some of the statements and posts, to be little more than an attempt at whitewashing sin to give the SBC the ability to say "See, we did something."

I understand where these opinions come from. To say they're not legitimate would be wrong.

Yet, I went to the conference hopeful. I was not seeking to see if anyone shared a "gotcha" statement or if the ERLC was simply putting on a show for the media. I was seeking to hear from those speaking, victims and advocates. I wanted to come away with some insight into what those in my church may be feeling who have suffered through similar events in their past. I realize that based on statistics there are likely many who have suffered as victims of sexual abuse in our church family (even if not perpetrated by anyone in a church in their past) and this reality is something I must consider when praying, preparing, preaching, and leading those whom God has placed in this local body for me to shepherd.

I want to shepherd well.

So, I came home with a brain full of information, numerous notes (some disguised as tweets) and insight into things that I had never even considered prior. While some practical information was provided to ensure our church is better suited to protect people from abuse (not just to protect our image or brand - oh, Lord, please no - but to protect victims and those who could be victimized) I found myself drawn into the very personal stories shared from the platform from women and men who had been abused. These were not just stories that would make a good episode of Dateline, but stories that exposed a sinful underbelly that often is allowed to grow in ministries, churches, youth sports and other organizations where predation occurs.

There were so many who spoke and shared. I won't be able to highlight all of them in this post. There are some whose stories continue to resonate, not in a way that "Oh, that's interesting" but in "Oh my! I am grieved that you experienced that and I'm amazed you have found the courage to share." For some, they are first-hand accounts of stories I've heard and read about. For others, they were insights and accounts that I had never heard prior.

My wife and I talked about the information presented. We began to question whether certain people we know and some we are related to could be victims of abuse. We saw in our own conversation what we were warned about by the speakers - the tendency to see all as victims or as victimizers. It happens. It was an overwhelming three days of information, all on the same subject. It was needed. It is needed. And while we recognize that not all people we know find themselves in one of the two categories mentioned above, we do realize that there are far too many who have personal stories that sound much like what has been shared in the Houston Chronicle and from the stage.

Some have gone public with their stories. Many have not.

Some have found support from their churches, church leaders, and denominational representatives. Others have not.

Some have abandoned the church. Others have not.

Some are hoping for change and help. Others have abandoned any hope for change.

This is the reality. It is a tragic reality.

Yet, I have hope.

That may not be enough for those who are needing more. I know that. But even in the midst of these sinful, nasty, abuse-laden, image-bearer trashing, falsely holy, power-focused stories of the past, I hold onto hope. It's not a hope in man, or in the SBC, or in the ERLC, or any denominational entity (and to be clear, I'm not anti-SBC.) It is only in Christ and the healing offered from the one whose image we bear do I have hope.

As Mary DeMuth stated from the main stage this past week, God has chosen to use the broken, sinned against, "foolish things" of this world to confound the wise. He is using the "least of these" in these cases, years later, to reveal ignored and excused sin, so that he may be seen clearly.

Brothers and sisters, we have much work to do. The work must be done, but not in our power. If done in our power...then, we have nothing but a conference and resources that help make our brand look caring (I'm not saying that is what we have, but that is what it will be if we rely on self) when healing and right steps must be made.

The church must help the helpless. We must listen to the cries of the wounded. We must stop believing that every victim is no more than a modern-day version of Potiphar's wife just making up accusations against innocent people. There are certainly some Potiphar's wives out there, but they are the minority.

Videos from speakers who have given ERLC permission to post will be uploaded soon and available for viewing. Our Caring Well team will watch. We will discuss the messages. We will continue to pray and take tangible steps in our church to ensure that we are not just a building on an avenue in Orange Park, Florida, but a local body of Christ-followers who love the Lord with all our hearts, souls, minds, and strength...and love our neighbors and most vulnerable as ourselves. We will be a church that cares well. In fact, it is a deep well whose name is Christ. We will continue to go to this well, for that is the only place where the Living Water can be found.

Until the videos are posted, here are some of the live-tweets I made as stories were being shared (Apologies to Andrew Schmutzer for misspelling his name in every one of my tweets):

Bold. Transparent. Strong. Powerful. Needed. Right. True. - This describes @megannlively and her message at the @ERLC #CaringWell conference today. Many have been and are being helped by the simple (not so simple, I know) fact you have spoken earlier and today. Thank you Megan! pic.twitter.com/OWzjsgFfTX

We have to learn from our past and change our future so that these stories of ignored and covered up abuse never happen again. @jdgreear @ERLC #caringwell #sbc pic.twitter.com/As3JSvxzlt

This is not a time where we need louder pronouncements. It’s a time we need action. @jdgreear @ERLC #CaringWell

Survivors of abuse cannot be expected to be the ones to drive accountability. @acwhit @ERLC #CaringWell

“I was molested and violated by an image-bearer who did not see me as one.” - @JackieHillPerry #CaringWell @ERLC

Why doesn’t the church talk about the messy stories of the Bible? Why do they avoid these? One reason is because pain doesn’t sell and in church today the “sell” is vital. - Andrew Schmutzer @ERLC #CaringWell

Eye-opening for me - That teen’s parent in your church who always wants to be in the youth room, or know what’s going on all the time may not simply be a helicopter parent but could be one who faced trauma as a teen & fears for their child. @SusanCodone @ERLC #CaringWell

Andrew Schmutzer is challenging churches and pastors to not ignore that men in the church have also suffered sexual abuse as children. One gender’s abuse trauma is no worse than the other’s but we must address how it impacts both boys/men & girls/women. @ERLC #CaringWell pic.twitter.com/AJpksDOB4r

We will not heal what we refuse to name. We will not name what we are unwilling to grieve. - Andrew Schmutzer @ERLC #CaringWell

If you ask for references (and you should) but don’t check them (like 90% of businesses today) you are liable for what those references would say had they been asked. @MinistrySafe @ERLC #CaringWell pic.twitter.com/UdDLeSVJbf

The safety of a child outweighs the inconvenience of adults. #CaringWell

To adults in kid/student ministry - DON’T wrestle with kids, DON’T massage their shoulders, DON’T hug them full on, DON’T touch them where a decent swimsuit wouldn’t cover.

Is there such a thing as appropriate touch? Yes, but these aren’t examples of such. #CaringWell

Not a promo for a book, to be clear. This talk is a candid, needed conversation where @R_Denhollander shares truth and reveals how and why victims in our churches are afraid to speak up. The challenge is clear. No more ignoring victims or rewriting narratives. #CaringWell pic.twitter.com/bAe4M86abX

Not a promo for

.@DianeLangberg speaks of the “Killing Fields” of Cambodia but also of our own SBC where the bones of the dead continue to rise. We must stop deceptively hiding our sin and repent. @ERLC #CaringWell pic.twitter.com/PYa8bctz9g