davidtarkington.com
Home Archives Subscribe
How Did Your Church Die? Two Ways - Gradually, Then Suddenly.
7 Things the Church Planter You're Supporting Wants to Tell You

Why Do We Have a Christian Flag and Why Is There a Pledge?

Last week, during a "Parents Night Out" event sponsored by the children's and preschooler's family ministry, I was the guest for a time titled "Pizza with the Pastor." It was during this hour I joined our elementary school-aged children. When I arrived, the children were working on decorating cookies with icing and decorations, so the sugar rush was coming. Pizza was on the way and that ratcheted up their excitement as well. Truth be told - they were probably more excited about the pizza than they were about having their pastor there.

This was more than a time to eat pizza, cookies, and play some games.

These children were given the opportunity to ask me any question they wanted. They did have to write them down beforehand and, our children's ministry leaders vetted them prior to reading them aloud in front of the entire group.

The questions were varied. Some were expected. I was asked how old I was (they guessed I was about thirty years older than I am.) I was asked my shoe size (which makes me think I may get a new pair of Nikes for Christmas.) I was even asked if Joshua in the Old Testament only had one foot. I had never heard that before, so I asked who brought that question. The young man raised his hand and read this verse...

Every place that the sole of your foot will tread upon I have given to you, just as I promised to Moses. Joshua 1:3 (ESV)

Apparently, because the work translated here regarding Joshua's feet (or foot) is singular, the big question is "Did he only have one?" Hmmm. There's something for you to think about.

I then received a question regarding the pledge to the Christian flag. For those who did not grow up going to Vacation Bible School in an evangelical church may not have any idea what this is. Some churches have the Christian flag displayed in their building or hanging out front. Some even have it displayed in Sunday School or small group rooms. For churches with an Awana program for children (as ours does) this flag is known and often a pledge is offered.

Rarely does anyone in a local church over the age of ten do anything with the Christian flag, though there are some churches and groups that have incorporated it into their routine and gatherings.

The question was asked not so much about the pledge, but about there being different pledges. There is one that many in conservative evangelical churches memorized in VBS that is, at least in their minds, the "official one." Then, there is a pledge created by more mainstream, liberalized churches memorized by many children and must therefore, be the "official" one.

And, there are others.

People love flags. There are hundreds of them that exist today and many more that have been used throughout history. Most of the time, flags have been used to designated nations, tribes, or people groups. While many Christians in America today believe the Christian flag is something that has a long, rich history and perhaps was used for centuries by believers throughout the world, the truth is that this red, white, and blue banner is not that historic. 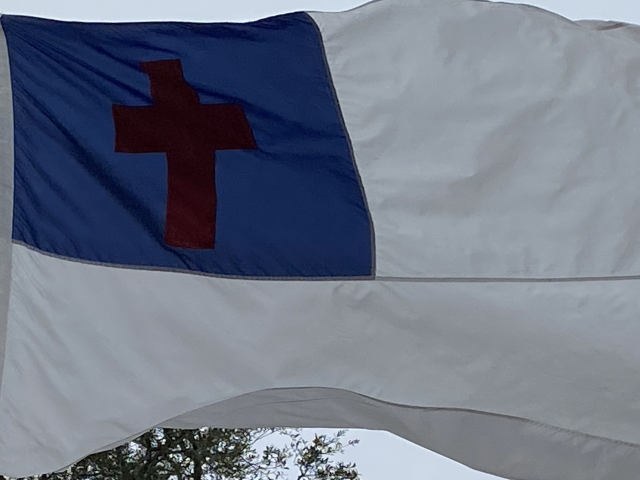 Here's a brief history of the creation of the flag as reported by Christianity Today...

The Christian flag dates back to an impromptu speech given by Charles C. Overton, a Sunday school superintendent in New York, on September 26, 1897. The guest speaker for the Sunday school kick-off didn't show up, so Overton had to wing it. Spying an American flag near the podium, he started talking about flags and their symbolism. Along the way he proposed that Christians should have their own flag—an idea that stayed on his mind long after the speech. In 1907 Overton teamed up with Ralph Diffendorfer, secretary to the Methodist Young People's Missionary Movement, to produce and promote the flag.1

This moment took place when the Sunday School movement was in full swing, not to mention the growth of young people's societies by groups such as the YMCA and denominationally in the United States.

The colors of the flag were taken from the US flag, but redefined. White was to represent purity. Blue indicated fidelity. Red stood for the blood sacrifice of Christ.

Over time, the flag became a symbol adopted by many American churches and due to the American missionary movement, it also became popular in South America and Africa.

What About the Pledge?

There are numerous pledges to the flag that have been used over time.

One that many grew up reciting is this:

I pledge allegiance to the Christian flag and to the Savior for whose kingdom it stands, one Savior, crucified, risen, and coming again with life and liberty for all who believe.

I pledge allegiance to the Christian flag and to the Savior for whose kingdom it stands, one brotherhood, uniting all mankind, in service and love.

What's the big difference? One (considered more conservative) emphasizes Christ, his death, burial and resurrection while the other (considered by many to be liberal) emphasizes an ecumenical brotherhood among Christians. It is subtle, but as no pledge is accidental (read about the adding of "under God" to the US flag pledge) there are reasons for the verbiage shifts and foci.

In addition to these two versions of the pledge to the Christian flag, there are others. Some eliminate "pledge" and replace it with "affirm." Still others change words so they fit their denominational understanding and theology.

There is no definitive pledge to the Christian flag.

That leads to the question, why do we even have this flag?

Is it biblical? Is it a good thing to have these pledges? Is it right? Wrong?

Likely, you haven't thought about the Christian flag much. To be honest, I don't think about it much. I hadn't thought of the pledge to it until the question came up last Friday.

Personally, after thinking about the Christian flag and the pledge...I don't think much of either of them.

In other words, I don't think it is a sin to recite a pledge, but I definitely do not think it is something that a Sunday School class or church should mandate as required before the beginning of class or a service.

I agree with what the writer of this article on the website gotquestions.org stated regarding the Christian flag and the pledge:

There is nothing sinful about displaying a Christian flag or reciting a pledge to it. Given that the Christian flag and its pledge are designed to honor the Lord Jesus, having the flag in a church or school can be a wonderful reminder of Christ and our commitment to Him. The Christian flag’s emphasis on the cross is biblical, since God, through Christ, worked “to reconcile to himself all things, whether things on earth or things in heaven, by making peace through his blood, shed on the cross” (Colossians 1:20).

At the same time, the Bible nowhere advises us to make Christian flags or gives us wording for a pledge. Since the Christian flag is a manmade design, displaying it or pledging allegiance to it is a matter of conscience and not required of any Christian.2

We still have the Christian flag at our church for VBS and Awana. It is a tool for teaching. Nothing more.

I pray that when the pledge is recited by these children it is done as a teachable moment of what Christ has done for us and not as a teaching or indoctrination that somehow this red, white, and blue banner is sacred. It is not. It is a flag created by a Methodist Sunday School superintendent on a whim. Let's just be sure we keep that in perspective.

1 Coffman, Elesha. “Do You Know the History of the Christian Flag?” Christianity Today, 6 Oct. 2017,    www.christianitytoday.com/history/2008/august/do-you-know-history-of-christian-flag.html.

2 "What Is the Christian Flag, and What Does It Symbolize?" Got Questions, https://www.gotquestions.org/Christian-flag.html.