This opening line in chapter one of Jack Eason's forthcoming book The Loneliness Solution not only draws in the reader but makes a bold declaration. Loneliness is a very real problem in the world. This seems strange since the living generations today are the most interconnected (and perhaps over-connected) generations in history. In an era where the word "friend" has become a verb to describe the act of confirming a connection on social media rather than simply a noun to describe another person whom is invited into a person's life in a close way, loneliness rages. 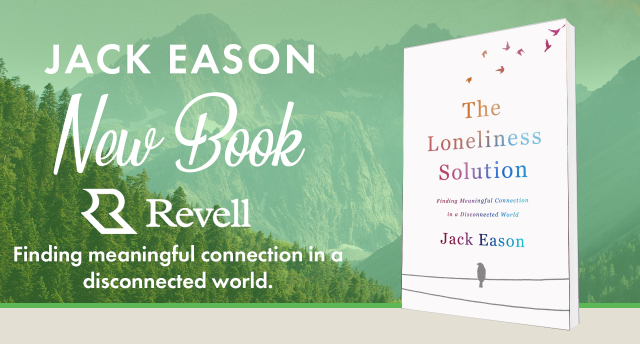 A few weeks ago, Jack sent me a pre-published copy of the book to read. I was honored to receive this from him and share a bit here of what he covers and why I recommend you get a copy.

Eason shares a story in the initial chapter of a fifty-four-year-old man was found dead in his home four months after his passing. Eventually, the smell from the apartment grew so pungent as the weather shifted from cool to warm, that neighbors starting taking notice. This man's remains were removed and a company was called in that specializes in cleaning the homes of those who are categorized as "lonely deaths." The fact that such a business segment exists startled me.

It is true that one can be lonely in a crowd. Even if the crowd is virtual or only on social media.

As the book unfolds, the categorizations of people groups merge when loneliness is clearly not something only young people, or senior adults face. It is a human issue and the heart of man and woman is susceptible to this great attack by the enemy of God. The enemy has attacked the image-bearers of God with subtle and strategic ways that cause many to believe they are okay and have many close friends. Yet, when the layers are peeled back, many of these same individuals find themselves in dark places socially and mentally as their concepts of friendship wane.

Loneliness is therefore, not just something "those people" face. All are potentially affected by the loneliness problem. There are many circumstances and situations that feed into this. Jack Eason delves into the depths of these issues well.

The Problem Has a Solution

As the book states in the title, and clearly lays out in the early chapters, loneliness is a problem. God stated as much in the story of creation.

Then the Lord God said, “It is not good that the man should be alone; I will make him a helper fit for him.” Genesis 2:18 (ESV)

It is not good for man, or woman, to be alone. In the Genesis account, God provided a solution. Throughout scripture, he provides a solution to the loneliness problem. Even today, he provides the solution.

Jack Eason exposes why the most interconnected and over-connected generations in history self-identify as the most lonely. He doesn't leave it as simply a description of a state of being, but reveals God's solution. With engaging and relatable stories, Eason expresses God's desire that man or woman not be alone, and provides practical, biblical steps to remedy the issue. Each chapter concludes with a list of recommended action steps. This is more than a theoretical treatise, but a call to action in the community, and as revealed in the final chapters, even within the church.

I strongly recommend this book, especially during this season of isolation. I was sent the pre-release copy of the book (to be published by Revell in October 2020) and have completed the read, with many highlights and underlines. During this time of self-quarantine due to COVID-19 it was a welcome read. What I previously considered a normal, busy schedule has been shifted and slowed. This is true for all. It is during these days that many are, as the country song stated, "finding out who their friends are." The church must, and is proving to, rise up to reconnect with those who were perhaps over-connected, but not really connected.

Loneliness is a problem. It is a deadly problem. Nevertheless, God has a solution. Be sure to order your copy of The Loneliness Solution today when it is published in October. In the meantime click here to be notified and to receive a FREE downloadable chapter from the book.