davidtarkington.com
Home Archives Subscribe
Why I Will Only Hire an Associate Pastor/Ministry Leader Who Is Willing to Leave Our Church
Are You Pastoring the "Kobayashi Maru" Church of the No-Win Scenario?

George Floyd, Justice, and a Longing for Change

Is this some horror-story version of the movie Groundhog Day?

We have heard this story, or similar ones, before.

"A black man is killed by a police officer - film at eleven."

"Video footage of the killing of a black man taken by bystanders with smartphones."

"Protests erupt after the killing of black man."

"Celebrities and athletes tweet their feelings regarding the killing of black man."

We have been here before. And...like you, I am ready for this version of Groundhog Day to stop. If it doesn't, more violence and killing will occur.

This time the story centers around a Minneapolis police officer arresting a black man named George Floyd for allegedly passing a counterfeit twenty dollar bill in a convenience store. I won't attempt to describe the event in detail here because news agencies are doing analysis and showing video accounts on every platform they have available.

I did watch the video once, and not unlike the videos of similar stories in the past (sadly, in the recent past) one viewing is enough.

I personally have similar feelings as when I heard of Ahmaud Arbery's death in Brunswick, Georgia (link here.) Yet, in the case of George Floyd, the story shifts due to involving active-duty police officers.

I have had messages from police officer friends since this incident in Minnesota revealing their feelings. The ones I have talked with and the posts I have read show a deep anger.

One officer told me - "Incidents like this takes away anything positive that officers do for the public. I can't imagine any situation where what they did would be acceptable."

He will likely be arrested.

But while all that is happening and the frenzy and calls for justice continue, let me share with you something from a pastor who used to serve in Houston, where George Floyd lived prior to being in Minnesota.

I did not know George Floyd. His background is being unearthed for news stories and you can read those accounts if you choose. His character is being either uplifted or degraded depending on the agenda of the ones posting or talking of him. Sadly, this too is part of the repeated stories whenever an tragedy like this occurs. It is wrong.

I also do not know this pastor personally, but we do have a few mutual friends. The pastor's name is Justin Bouldin. He now serves in North Carolina, but in 2015 he served in Houston. Justin posted this on his Facebook page (available here.)

Let me tell you about George...

My family and I moved to 3rd Ward (Houston, TX) back in August 2015. We moved there to serve as church planting residents at Resurrection Houston, a church that gathered and had their HQ right there in the Tre. The church also dedicated itself to serving a large housing complex called Cuney Homes. Cuney was nestled right in the heart of 3rd Ward, across the street from TSU.

When we arrived, the church was in the midst of planning a 3 on 3 basketball tournament at Cuney. It was a way to bring a day of positive energy, lots of fun, and just love our neighbors well.

The day of the tournament was your typical hot, sun-drenched August day in H-Town. But that didn’t matter because there were so many people out there on and around the courts that day.

George played on one of the teams that were entered in the tournament. (In fact, they ended up winning the whole thing.) During some games where they weren’t playing, I happened to get to sit beside and talk to George for a few minutes. He knew I was with RH and I introduced myself as the “new guy” (New Drew is how I said it to all the Cuney residents) who was serving with them and in Cuney Homes.

As we watched the games in front of us, George had these words and I will always remember them. He said:

“We need more of this in our community. See how everyone is out here, having fun and not worried about no nonsense. We need more positive opportunities for our people and that’s why I’m so glad Rez Houston is out here. Y’all always showin love and keeping it real for these youth. They need it more than anything.”

That was George. A guy who knew where he was from and never made excuses. He wanted a better life for himself, but also for his neighbors.

In fact, the picture on the left is the next day at our church service we had at Cuney. George and his team came to service and we recognized them as the champs from the previous day! 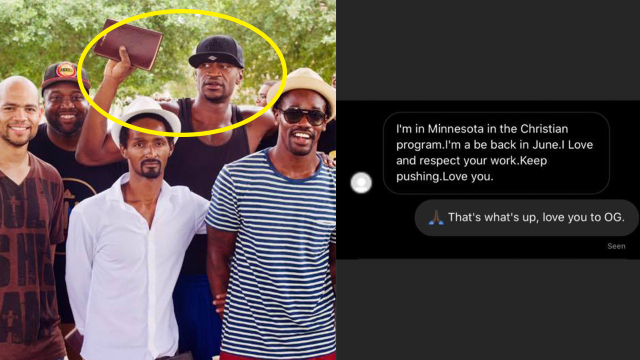 But that wasn’t out of the ordinary. George would always help us put out and fold up chairs when we would have Church in the Bricks. My brother Ronnie Lillard (Reconcile) told how George helped him drag the baptismal out there so we could baptize people who had professed faith in Jesus.

Ronnie, Corey Paul, Nijalon DuBoi James Dunn, P.T. Ngwolo can tell you so many more stories of George and how he was one of the people of peace that helped open the door for Rez to become a part of the Cuney community and share the hope of Jesus with so many.

My heart is broken this morning after weeping last night. My heart hurts for our Cuney and 3rd Ward family for the tragic loss of yet another life. From what I have heard, the whole reason George was in Minnesota was because the seeds that had been planted and watered all those years were starting to take root. He was pursuing and taking steps of repentance and following Jesus.

But not only am I heartbroken, I am filled with anger. I want to say it is righteous and I pray to God He hears me, but I am tired of the character assassination and same M.O. every time something like this happens. This is so raw for me right now because I personally knew the man. I got brothers and sisters that literally spent so much time pouring into his life and watching the Lord work miracles. (The last picture was a recent message from George to Nijalon that he sent while he was in Minnesota.)

It hits different when you know the victim and have seen the real character. It sickens me that people who do not know him and have never encountered him want to freely throw out garbage takes about how he should’ve done this or probably did something to warrant what happened.

Justin writes more and you can read that on his page, but what he shares here goes hand-in-hand with a point I made last Sunday in my sermon.

When we begin to see people as image-bearers of Christ, with friends, family members, siblings, etc., rather than just as unnamed, non-important characters in a news story then perhaps our culturally fueled insensitivity to violence and injustice will be piqued.

I'm Praying for a New Day

Did George do something wrong that day? Did he break a law? Did he pass a counterfeit bill? I don't know. I do know based on what the videos show and after hearing from police officers who serve faithfully and honestly in their own communities that the actions and results in Minneapolis were unjust, wrong, evil, and ultimately deadly.

Like you, I am seeing tweets and postings (not unlike this one) from numerous pastors and church leaders in our religious sub-group of evangelicalism. I know that Jesus Christ and a changed heart is the only thing that will cure this sin-saturated world. I know that. My fellow pastors of all shades of melanin know that.

I also know that in order for this version of "Groundhog Day" to end, something has to change. I am praying for God's lead in what the next step will be. I am asking for wisdom for pastors and church leaders as we seek to respond righteously, and lead under God's direction toward a new day, not a day of temporal racial reconciliation, but of true unity in Christ.

I pray for a day when calling for justice does not get a Christian blasted for being anything other than true to God's Word.

I pray for a day when seeking to understand how brothers and sisters experience daily life in our communities does not come with accusations of abandoning the sufficiency of God and his Word.

I pray for a day when our children and grandchildren can sing the old song "Jesus loves the little children of the world...red and yellow, black and white, they are precious in his sight" and realize that Jesus does love all and that because he does, we must too.

I pray for a day when white people will stop saying "I don't see color" when referencing a person of darker melanin. I understand the sentiment is "I'm not racist" but the words actually say "I don't value your unique heritage and viewpoint."

I pray for a day when virtue signaling will end and true, God-fueled love for each other will reign.

I pray for a day when men like George Floyd will remain known only to his family, friend group, basketball playing buddies, and local church brothers and sisters and not to the entire world because of a tragedy that turns him into a hashtag.

I pray for this day.

And I know it is coming.

He who testifies to these things says, “Surely I am coming soon.” Amen. Come, Lord Jesus! - Revelation 22:20 (ESV)