"The Gospel According to Satan" by Jared C. Wilson - Book Review

I'm slowly working through the stack of books in my home office that I intended to read during the COVID-19 quarantine. Let's just say that I struggle to find the time to read as much as I would like, even when it seems I should have more available time.

I recently completed Jared C. Wilson's latest book The Gospel According to Satan. Apparently, there are half a dozen books available with the same title on Amazon, covering a variety of subjects that could be considered Satan's gospel, so be careful when ordering your copy of the book. Get the one with the cover below and this subtitle "Eight Lies About God That Sound Like the Truth." 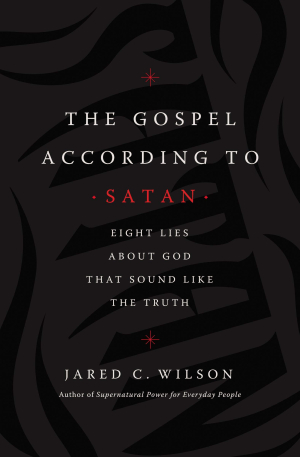 Wilson is an accomplished writer with numerous books focusing on the Christian life, church, theology, and more. Prior to the release of The Gospel According to Satan, our church staff read The Gospel-Driven Church together (a recommended read for any pastor or church leader.) This led to numerous healthy conversations regarding the focus of church ministries and the need to continue shifting away from the easy draw of "attractionalism" as a church marketing tool.

The title and cover of his latest book is intriguing. As one who grew up in the 1980s, this initially seemed like it could be a Ronnie James Dio song (or maybe a Stryper song for those in the church youth group?")

While the title could lead one to believe this is a deep dive into spiritual warfare or demonology, it is not as some would think. It is about the lies of the enemy. There are clearly points related to the demonic lies that permeate our world, but Wilson's book delves into what some may say is the subtlety that characterizes the one who first said to God's image-bearers "Did God really say...?"

Wilson states early that the writing of this book was spurred after the publication and popularity of William Paul Young's book Lies We Believe About God. I had almost forgotten about Young, most well-known as author of The Shack (not recommended by the way.) Young's faulty theology sounds like other heresies that have arisen throughout the centuries. As Tim Challies stated in his review of Young's book, "There is barely a chapter in the book that does not do damage to one or more precious doctrines. " (full review here on challies.com)

Thus, Wilson began putting together the outline that would eventually become The Gospel According to Satan. Wilson carefully deconstructs a number of well-known and oft-stated "truths" about life and God. These statements are not reserved for those outside the church, but have even crept into the current evangelical lexicon and when stated enough by those who claim to be children of God, eventually are believed by many to be true.

The lies of the enemy began in Eden with the "Did God really say...?" question as mentioned prior, but also fall under the categorical accusation that "God is holding out on you." Wilson goes to these as the main plays in the enemy's playbook and and helps the reader see that the deception is so subtle that many well-meaning Christians find themselves doing just as Adam and Eve did by believing lies that that comprise this "gospel" according to Satan.

These lies likely sound familiar. The challenge is when you read one of these lies and think "What? I say that all the time. I'm not sure that's a lie." Thus...the need for the book.

Wilson cuts no corners on relaying the depths of biblical theology and doctrinal soundness in refuting these lies. Yet, when reading his book it seems as if you're sitting across a table at a coffee shop discussing these things with the author. This ability by a writer is definitely a skill to be admired, and perhaps a gift. As Wilson dissects the aforementioned lies, there is no condescension offered to the reader. This is the loving invitation to see how that which is commonly believed by many actually stands at opposition to the true gospel.

Wilson's transparency regarding personal thoughts, challenges, and issues appear throughout the book. By the end of the book, you feel as if someone who loves the Lord dearly actually loves you as well (even if he never has met you) simply because you too are an image-bearer of God.

The lies are shared as life-or-death warnings, and truly they are.

This book will be the next one our staff reads together. This time, it won't be a focus so much on the shifting away from a church ministry process, but a focus on the subtle shifts away from gospel truth that we all re susceptible to believe.

I highly recommend the book and am glad it was near the top of my stack of quarantine books.