I have a prediction.

With all that has been happening related to racial issues in our nation over the past month, especially, it will not be long before Juneteenth is a recognized national holiday.

Currently, the day is recognized in forty-nine states, but rarely is mentioned and most employees do not get the day off.

It was a few years ago that I began posting on our church social media pages about Juneteenth every June. For our predominantly white community and church membership, this holiday is one often not spoken of, and more often than not, not even known about. 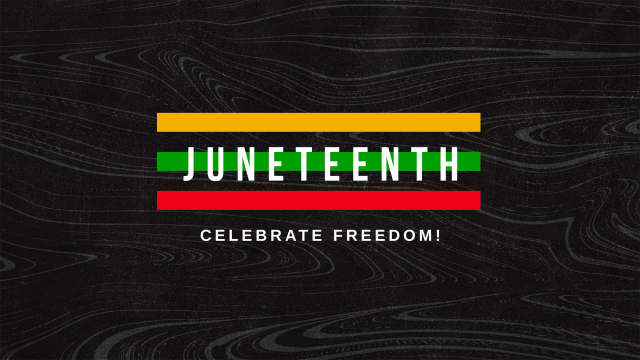 It could be said that many of our children are not taught about the holiday because it occurs in the summer and not during the school year, but there are other holidays in the summer and most Americans are fully aware of them. Of course Independence Day should be known by all, but I imagine more Americans have heard of Flag Day than Juneteenth.

I first heard of Juneteenth when I was a high school student in Texas. Sadly, that means for the first sixteen years of my life, I had never known of it.

It has been called "Freedom Day" and the "Black Fourth of July." This day, as explained on the website juneteenth.com commemorates the following:

Juneteenth is the oldest nationally celebrated commemoration of the ending of slavery in the United States.  Dating back to 1865, it was on June 19th that the Union soldiers, led by Major General Gordon Granger, landed at Galveston, Texas with news that the war had ended and that the enslaved were now free. Note that this was two and a half years after President Lincoln’s Emancipation Proclamation - which had become official January 1, 1863. The Emancipation Proclamation had little impact on the Texans due to the minimal number of Union troops to enforce the new Executive Order. However, with the surrender of General Lee in April of 1865, and the arrival of General Granger’s regiment, the forces were finally strong enough to influence and overcome the resistance.

It is hard to imagine that black men, women, and children remained slaves in south Texas for over two years following the Emancipation Proclamation. Yet, when you study our American history, this should not be surprising.

Initially, the celebrations of Juneteenth grew and became annual events. These celebrations had little or no impact among the non-black communities. In fact, there was hostility from some toward the former slaves and their children for even desiring to celebrate.

Over time, interest in the annual celebrations waned. The decline is described here:

Economic and cultural forces led to a decline in Juneteenth activities and participants beginning in the early 1900’s. Classroom and textbook education in lieu of traditional home and family-taught practices stifled the interest of the youth due to less emphasis and detail on the lives of former slaves.Classroom textbooks proclaimed Lincoln’s Emancipation Proclamation of January 1, 1863 as the date signaling the ending of slavery - and mentioned little or nothing of the impact of General Granger’s arrival on June 19th.

The Depression forced many people off the farms and into the cities to find work. In these urban environments, employers were less eager to grant leaves to celebrate this date. Thus, unless June 19th fell on a weekend or holiday, there were very few participants available. July 4th was already the established Independence holiday and a rise in patriotism steered more toward this celebration. (juneteenth.com)

During the rise of the Civil Rights Movements of the 1950s and 1960s, Juneteenth grew in popularity once more. In 1980, the day became an official Texas state holiday. Since then, many other states have designated the holiday.

June 19, 2020 is Juneteenth and I believe many will be celebrating. Perhaps more this year than in the past. Hopefully we will soon see Juneteenth as a national celebration of freedom, simultaneously reminding us of our sins of the past (repentance and lamentation are good and healthy,) and also of the move toward truly recognizing as a special day in July reminds us that "We hold these truths to be self-evident, that all men are created equal, that they are endowed by their Creator with certain unalienable Rights, that among these are Life, Liberty and the pursuit of Happiness.