davidtarkington.com
Home Archives Subscribe
Are You Pastoring the "Kobayashi Maru" Church of the No-Win Scenario?
Juneteenth - A Holiday Many Americans Will Hear About for the First Time Today

Dr. Albert Mohler has become one of the best-known Christian leaders in the United States over recent years. As president of The Southern Baptist Seminary (SBTS) he has a particular platform in evangelicalism that offers him opportunities to speak and respond to the many issues impacting the world today from a viewpoint described by Mohler and others as a "biblical worldview."

I, for one, have appreciated his input on numerous cultural issues, especially over the past decade and a half, as seismic shifts in cultural norms and the now-termed "moral revolution" has sought to change the landscape of our understanding of right and wrong.

In addition to serving as the president of SBTS, Dr. Mohler has a prolific speaking schedule, as he is sought by many to fill pulpits and speak at conferences and special events. He is the host of two podcasts–"The Briefing" and "Thinking in Public." He is also the author of numerous books and this article focuses on his latest published by Thomas Nelson Publishers titled The Gathering Storm: Secularism, Culture, and the Church. 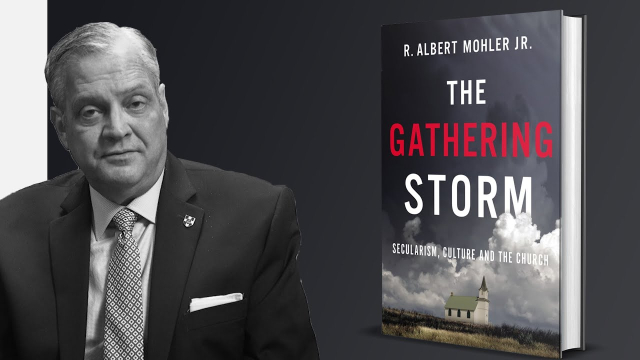 One of Dr. Mohler's favorite figures of history (known to anyone who regularly listens to his podcasts or has visited his personal library) is Sir Winston Churchill. The British Prime Minister, known for his solid and tenacious leadership of the United Kingdom during World War II, wrote the first of his six-volume series on the Second World War covering the growing threat of Nazi Germany. Churchill used the title The Gathering Storm for this volume. Mohler credits Churchill's book title as the reason he chose his book's title.

As the threat of Nazism was growing in Europe, many in the UK and elsewhere minimized Hitler's potential impact and most saw Germany's revival as something that would remain within the German borders, not impacting the neighboring nations, much less the world. Churchill, on the other hand, was a voice crying out for others to take note of the growing threat. When it became clear that Hitler and his powerful Third Reich was bent on European (and eventual global) domination, Churchill seemed prophetic as one who had warned of the storm.

In the same way, Dr. Mohler speaks in this new work of the growing and present threat of secularism to the culture and to the church. This is not a cry heretofore unmade. Dr. Mohler, as well as others, have been speaking of these threats for decades. Not unlike many in the UK who heard but ignored Churchill's warnings, sadly it seems that many Christians have either willingly or unintentionally been ignoring the warnings of secularism to such a degree that now the storm is not simply something that may impact us, it is clear that landfall has occurred.

For those, like me, who live in Florida, hurricane preparedness is a way of life. Floridians have different seasons than other regions in the nation. We have spring, summer, football, and hurricane seasons. When hurricane season begins, we begin to watch our local meteorologists more intently as they share of new storms forming off the west coast of Africa. We know those storms often build up, begin spinning with more intensity, and at times, move from tropical depression to tropical storm to hurricane with eventual impact somewhere in the Caribbean, the Gulf of Mexico, or the southeastern coast of the US. The "cone of concern" is developed and we watch daily wondering if we will be impacted personally. Watching the daily hurricane updates is like watching a turtle run a race. It's slow and plodding and uncertain...until it isn't.

Living in a state where hurricanes are part of our annual schedules, there are often times where warnings are given, but ignored by many. It is akin to the ignoring the flight attendants in commercial flights as they give instructions regarding how to wear the seatbelt, put on oxygen masks, and emergency exit rules. Since most who have flown numerous times have never experienced an in-flight emergency, these repeated warnings go unheard. Yet, when something mid-flight does occur and the oxygen masks fall from the console, it is clear that many would be doing their best to remember what was said pre-flight as they slide into panic.

In our culture wars and shifting sands of morality and rightness, the storm is no longer on the way. It is here. For those who have listened to Dr. Mohler's daily podcast "The Briefing" and at times felt overwhelmed with the data and daily updates of issues that run counter to a biblical worldview, his new book is a welcome resource. Many of the illustrations and delineated accounts in the book have been covered at some point by Dr. Mohler in one of his briefings, but to have the book available giving a systematic unveiling of the history of secularism and the subtle (and overt) impacts of this philosophy in our lives is telling and helpful. In some cases, the shifts have seemed immediate (e.g. the 2015 Obergefell vs. Hodges Supreme Court case legalizing same-sex marriage) but in truth are simply the latest visible impacts of the storm gusts upon culture.

When hurricanes make landfall, the impact varies depending on wind speed, the structural strength of the buildings nearby, the depth and health of the roots of trees, and the preparedness of residents. Once the storm has passed, disaster relief teams arrive (many wearing yellow hats representing Southern Baptists serving and helping in Christ's name,) damage assessment occurs, and next steps for recovery begin.

Unlike a natural hurricane, the storm we now face seems to be only increasing in intensity with an ever-widening cone of concern with no end in sight. Yet, as Christians we are affirmed that as we stand firmly on the gospel of Christ, though a narrow foot-hold certainly, we will not only withstand the storm, but thrive in its midst and in the aftermath. So, be encouraged.

In Dr. Mohler's book, he focuses on nine specific issues impacted by the rising secularism. Sadly, this is not only a secular, godless worldview present outside the church, but also at times visible within. The chapter titles categorize these areas so the reader can more clearly see that which has occurred and is occurring. Chapters speaking of "The Gathering Storm in..."

After reading The Gathering Storm, I cannot help but see indicators of the growing secularization and worldview shifts daily as new headlines appear on my newsfeed. In fact, yesterday, the US Supreme Court ruled in what I deem a disastrous ruling, that "that 'sex' does, in fact, include sexual orientation and gender identity, despite the fact that legislators repeatedly voted against including those categories in the legislation." (ERLC - "After the Bostock Supreme Court Case") Where would this lie in Dr. Mohler's analysis? It is clearly part of the storm related to gender and sexuality, but also impactful in the area of religious liberty, not to mention family and generational divides.

This is just one headline from today.

One can simply peruse other current and recent stories to see how the moral revolution and the rise of secularism continues to impact all avenues of our culture on a daily basis.

Dr. Mohler's concluding chapter hearkens once more to Churchill's warnings prior to World War II. While Churchill, along with the other Allied leaders, entered into the storm against Nazism, fascism, and imperial despotism with a united, military campaign that proved to be essential for victory, Dr. Mohler is not calling for a militaristic movement. He is, however, clearly reminding the church that what we face today is truly a battle. The church has been in this spiritual battle since the very beginning, but the storm of secularism is our most recent and current beachhead.

Dr. Mohler gives reasoned, practical, and timelessly biblical encouragement and insight into how Christians and the church must live in such times. The concluding chapter is titled "Into the Storm" and that certainly is our calling.

I recommend The Gathering Storm highly and encourage readers to subscribe to "The Briefing" for continued daily updates of current trends and shifts in culture from a biblical worldview.

Insightful Quotes from The Gathering Storm