davidtarkington.com
Home Archives Subscribe
Juneteenth - A Holiday Many Americans Will Hear About for the First Time Today
Persons of Color Do Not Need a "Seat at the Table." Rather, We All Need a New Table.

During the early part of the 2000s, it seems that more and more independently funded "Christian" films were being released in theaters and direct to DVD. Some of these films featured Hollywood stars (yet mostly actors who were not A-listers or who had made their name decades earlier) or unknown actors looking to break into the industry. Some featured actors from local churches and friends of the producers.

Many of the films were produced on shoestring budgets and were as much a labor of love of the creators as an attempt to make a profit.

I enjoy many of these films. It's refreshing to be able to watch a positive, faith-friendly film with family members. Of course, some films are better than others and some...well, at least they were trying to do well.

In 2006, I watched a film starring a popular artist in Christian music. To be honest, our church staff was planning to go on a weeklong retreat and I needed to find something to fill the Wednesday evening adult gathering at church since all staff would be gone. My regular lay-Bible teachers were already committed, so I went the easy way and found a new film to show at the church. I even purchased the license to ensure we we legal.

"The Second Chance" Went Where Other Christian Films Would Not

I wasn't sure what to expect, but let me say that this film was not exactly like the other "faith-based" movies of the era. In fact, I can't remember any other Christian film rated PG-13 that was marketed to churches (probably because one of the pastors says "damn.") I don't count the R-rated "The Passion of the Christ" in the same genre. 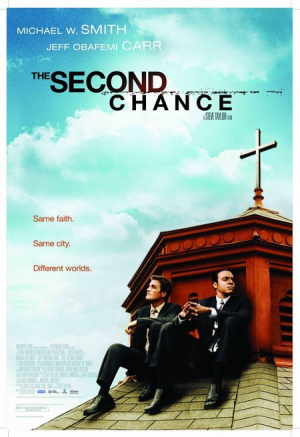 On IMDb.com, the following synopsis of the film is given by user Tracey Zemitis:

Ethan Jenkins (Michael W. Smith) and Jake Sanders (introducing Jeff Obafemi Carr) are both passionate pastors who worship the same God from the same book--but that's where the similarity ends. White and well-to-do Ethan is comfortable in his music ministry at the media-savvy suburban mega-church, The Rock; Jake is a street smart African-American who ministers to the gang members, teen mothers, and drug addicts of the urban Second Chance. When they are suddenly thrown together in a tough neighborhood and forced to work side by side, Ethan discovers there is no boundary between the streets and the sanctuary. But can the faith these two men share overcome the prejudices that divide them to give themselves and a struggling urban church a second chance?

The film is now fourteen years old. Most people I know have never seen it. Those who have may not remember much about it. Yet, this morning, one of the most pivotal scenes of the film came back to my mind. I have a copy of the film and I looked up that scene. The writers (Steve Taylor, Henry O. Arnold, and Ben Pearson) took a risk of potentially upsetting the very audience who would purchase the DVDs and watch the film. I think it was a needed risk. If you have ever listened to Steve Taylor's songs or heard him interviewed, you know that he is not one to shy away from risky endeavors for the sake of the speaking plainly to the church. The message in the film is clear and sadly, I am not sure the evangelical churches in America are much further along from what is depicted here.

Here is the scene. Let me set this up. Michael W. Smith is the prodigal son of a suburban mega-church pastor who is trying to rehab his image. He's a Christian singer (not too much of a stretch for Smitty) who is instructed by the church elders to serve at the pastor's first church, and current sponsored mission in the 'hood (as it is described.) The pastor of the church located in the inner city is African-American and once a year is invited as a guest to the megachurch for the fund-raising day where money is pledged by church members to keep the inner-city church open. This scene takes place on that Sunday. Knowing this...the scene is self-explanatory.

According to JustWatch, the film is not streaming anywhere at this time, though it may be available on YouTube.

As with most films like this there is a somewhat happy ending, though it is not sugar-coated and simple as many "Christian" films show. I am left with the questions regarding what we are facing in our city, community, and nation now. As evangelical Christians, we must seek to live and be the Lord's church, commissioned as he has called us, living as missionaries in our communities and neighboring ones. Throwing money at a mission (or a cause) is not the answer and is no substitute for living our faith.

I have no easy 1-2-3 steps for the church, but I know that which is illustrated in this film is not fiction–though I wish it were.

We must do better.

Posted by David Tarkington on June 20, 2020 at 08:38 AM in Current Affairs, Hot Topics for Churches, Movies, Religion | Permalink | 0 comments