davidtarkington.com
Home Archives Subscribe
Praise God.......for the Pandemic?!?
Celebrating Others Failures Is Not a Commendable Trait

Welcome to 2020, the gift that just keeps on giving. Way back (about 3,000 days ago) on January 1, there was much optimism from many for this year. Of course, in the United States, we were just getting started in what we knew would be a stressful, if not entertaining election year. Then, we entered the pandemic, followed by racially focused protests, riots, murder hornets, and the upending of everything that was considered "normal."

But at least the political machines would keep moving. Whoo hoo!

I have always been a political junkie. I read biographies, watch historical documentaries, and stay up late viewing the returns on election day like some watch the Super Bowl.

The Worst Political Divide in US History 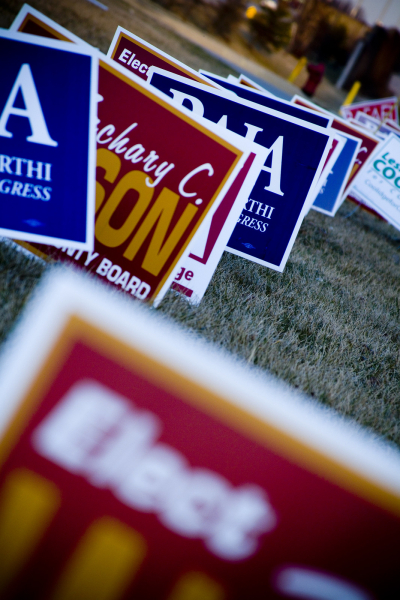 We are now entering the homestretch of election year 2020. The two major political parties in our nation are pulling no punches in addressing their base and the coveted "middle-of-the-road" voters. Attack ads have been the norm since...well, since perhaps the late 1700s. It just seems that it is worse now than ever.

I have had conversations with friends who have stated as much.

They say things like, "We are more polarized in this nation than ever before in our history." I smile and usually respond with, "Well, maybe not. There was this little thing called the Civil War that seems to show that our nation actually was a bit more divided in the past than we are now." Then, I repent for being snarky.

When the conversations drift toward frustrations over presidential elections, perceived corruption, unqualified and unlikable candidates, political backroom machinations, and other similar things, I encourage my friends to go online and read a bit about the 1876 presidential election between Samuel Tilden and Rutherford B. Hayes. I know other people don't tend to care so much about history, but it helps to gain a bit of perspective when we think our experiences are the worst in our nation's short history.

When You Merge Politics and Religion You Get Politics

Growing up in a Baptist church, I remember hearing pastors and church members share their positions on political matters. As a child, I did not pick up on them as quickly, but as I grew older, it became clear that the church was not devoid of political posturing, either by local candidates or those who became vocal evangelists every four years (not for their faith, but for their party of choice.)

In the late 1970s and early 1980s the politically religious categorization seemed to truly solidify in the churches our family attended. Later, the polarity became more pronounced on pro-life issues. Within the evangelical world, party platforms became the litmus test for affirmation and the anti-abortion issue was paramount. It remains so. To be clear, I am pro-life, believing that life begins at conception, so this issue is a major one for me.

While the pro-life issue is a primary issue for most (those on both sides of the issue) there are other issues, platform statements, ideology, interpretations of the US Constitution, and integrity of candidates that drive many voters. Between the far-right and far-left contingencies is a middle group that may or may not be registered as a certain political party, but for decades has been the group candidates and parties target. In this middle group, as surprising as it may seem to some, are people who are redeemed by the blood of Christ, active in their Bible-believing, gospel-centric churches, committed to a biblical worldview, and seeking to live transformed lives for the glory of God and the good of themselves and their neighbors.

Yes, that means there will be someone in heaven with you (if you are a Christian) who did not vote exactly as you did for every election!

Vote Your My Values

The "Vote Your Values" theme has been used for years. There is even a website and group titled this focused on what is deemed "Judeo-Christian Values." I do not dislike this, but I must admit that when I want people to vote their values, I actually want them to vote my values. That is because I believe I am right. Do you know anyone like that?

Values matter to me.

As a Christian, I unapologetically care about issues from what I deem a biblical worldview. I see that there are numerous things that truly matter and no individual politician, or party lands well on all issues. That has always been true. I know that, but with the advent of social media and instant information through tweets and push notifications, it is more clear now than ever.

What happens when you just do not like (that may be the wrong word...perhaps "line up with" or "approve" would be better) the only candidates available on the ballot? Like me.

Some choose to vote for a third party, knowing their selected individual has no real chance of winning, especially in national elections. In local elections, it is often true as well, but not always. To vote this way may be honorable, but results in others angrily stating "You wasted your vote! You're a bad American!"

Some of the tweets shared earlier this year resonate with me and echo the feelings that I and many Christians now have.

To feel politically homeless is to be reminded of my heavenly citizenship and the home being prepared for me that will provide *eternally* the joy, peace, and power no earthly abode will ever afford.

To be politically homeless is one of the best things that could happen to the spiritual lives of people who are “elect exiles,” “sojourners,” and “strangers.” Politically homeless better fits the Christian’s true identity. Let’s live into that identity.

Being politically homeless, or a political orphan is not a bad thing (unless you're running for office.) Though I have been registered as a party voter in my state for years and at this point don't plan to change that, though I may at some point in the future choose to remove any party affiliation from my registration. I know, just by making that statement may lead many in my church to be offended, want to leave, actually leave, or worse...just stop viewing me as biblically sound. I may regret stating this publicly (but I doubt it.)

Years ago, I made the decision to no longer put signs in my yard or political stickers on my vehicles. It is not that I do not have strong beliefs and leanings related to whom I will vote, it is more that I choose not to eliminate an opportunity to have a gospel conversation with someone simply related to politics. Kingdom work trumps political promotion.

I am conservative. I am very conservative, but unlike many I know what I seek to conserve. To be called progressive by some is interesting to me. It's not a term I would use, but nonetheless I have heard this. "Progressive" is like the term "contemporary" when defining a church's music style. One church's "contemporary service" is another's "traditional service." (FYI - just adding a drum set does not make you contemporary.) So, "progressive" not unlike many other terms is defined by the user more often than not. Some may even call me a liberal. Uh...no. That's ridiculous.

To be in the public eye, even as a local church pastor, is to be called things by some who do not truly know you and ultimately just don't like you (for various reasons.)

I actually like the word "evangelical" but I fear we may have to abandon it in coming years. I have found in conversations with others that outside the confines of what we had termed "evangelical Christianity" the term is believed by many to be a synonym of a political party. And...as stated earlier, when you mix religion and politics, you get politics. I wonder if the term "evangelical" will eliminate the evangelistic conversations from occurring in certain areas where we seek to make Christ known and increase his Kingdom. If so, we need another word and I am up for suggestions.

We must be evangelistic, fulfilling God's great commission and greatest commandment, even if we cannot call ourselves evangelical.

Be a Good American - Go Vote

I do believe it is not only our right and privilege, but our responsibility to participate in the electoral process in our nation. As flawed and broken as it may seem, it remains an amazing gift to the citizens of our nation. To forsake one's constitutional right to participate is wrong, in my opinion. So many around the world would love to have such a right.

As election day nears, and the signs accumulate on every street corner in your community reminding you that every single candidate is the only answer to the problems of our world, pray over whom God would have you support. Trust him with the process and even as a homeless, political orphan, let your voice be heard (even if silently at a voter's booth in your precinct.) It does matter.

For whom should you vote?

It may seem obvious to you. Congratulations.

It may be something you are wrestling over. Welcome to the club.

Then fill out that ballot or check that box.

And after the votes are tallied...

Posted by David Tarkington on August 13, 2020 at 11:31 AM in Current Affairs, Hot Topics for Churches, Politics | Permalink | 0 comments