davidtarkington.com
Home Archives Subscribe
Baptists, Sexual Abuse, and the Long-Awaited Next Steps
It is Great to Be Gospel-Driven, But You Don’t Have to Tell Everyone

The Power of Panic

There are many questions about life that come to mind when a young person is preparing to step into full-fledged adulthood. Questions about work, marriage, relationships, and many other things abound. Faith questions are real for those who grew up in the American evangelical Christian world. These young people begin to flesh out their faith in Christ. Do they truly believe or are they just holding onto their parents' belief system? Is Christ real? Would they believe in Jesus if they had grown up in a non-Christian family? What about...fill in the blank?

I actually loved growing up in a family that treasured God and his church. My faith was strengthened throughout my childhood by my parents as well as God-fearing adults and teachers in the churches where we served. This does not mean I did not have questions. I did. I just found that God in continually drawing me to himself provided answers through his Word and through his church. During my first couple of years in college I found I was actually more secure in my faith than I was in high school. Sadly, I also found I was drawn to a certain sub-culture of Christianity that sensationalized certain things to create a sense of urgency. It was not a biblical urgency based on Christ or his great commission, but an urgency that seemed to grow louder and more angry over time, seeking to create stories that did not exist for the purpose of "rallying the troops." (We Christians tend to love militaristic metaphors.)

I started to listen to talk radio and enjoyed the takes on politics and personal freedoms that were displayed. This may actually be the genesis of the age of mean-spiritedness disguised as free speech that we now have. I even found Christian talk radio programs that paralleled the political ones. In fact, there was not much difference in the programming. Both were bombastic and loud. Both were built upon the personality of a host who was more entertainer than news reporter. Both were perpetually raging about the dangers of the "others" out there, most often liberals and evil spirits. Both were selling products–maybe a newsletter subscription, books, caps, t-shirts, and bumper stickers.

Then, in 1988 while I was a junior in college, something happened that thrust the evangelical Christian world into panic. Due to me being hooked by the voices of the day, I found myself deeply interested. A movie had been produced by an Oscar winning director that would depict Christ in a blasphemous way. In addition to the Oscar-winning director, the film featured some big name Hollywood actors, but that was not what pushed it to the front-page of my university's newspaper and the others in cities across America.

It seems that even without seeing the film, a backlash from evangelical Christians grew so loud that the production company did not really have to spend money on promotion. The controversy was enough. Thus, when The Last Temptation of Christ was released many went to see it just to discover what the big deal was all about.

What was the big deal in 1988 regarding this film? This was The daVinci Code before Dan Brown ever wrote his blasphemous novel (BTW - Christians did the same thing in 2003 with Brown's book and the movie when it was released. I am guilty of getting on that bandwagon.) How could a film cause so many Christians to panic? Christian leaders such as Bill Bright, James Dobson, Jerry Falwell, James Wildmon, along with Catholic leaders in the United States pushed very hard to stop the production and to keep the film from premiering. It has been reported that Bill Bright even offered Universal Studios ten-million dollars to buy up all the film prints and negatives just to destroy them. 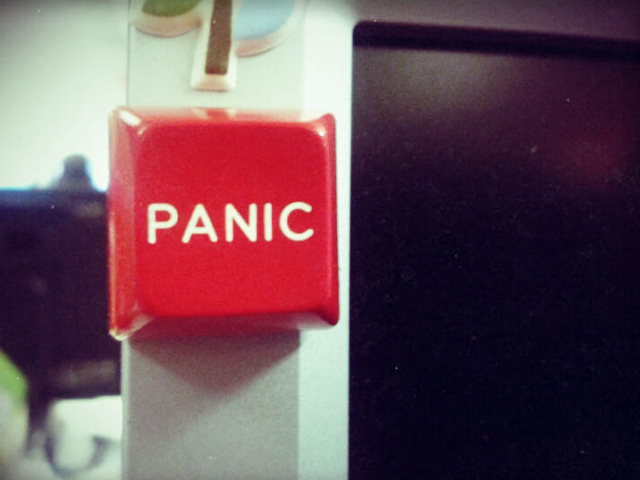 No wonder people lined up to see this film. Curiosity alone makes the typical person think "I need to see what all this is about."

While Christians gathered with placards and protested the studio and movie theaters, more and more stories about the film, its content and message were shared. It also seems that more people actually paid money to view the film than otherwise would have. As they say, any publicity is good publicity, right?

To put it bluntly, the organized Christian talk radio effort, petition signing, and righteous rallying did little but cost money and create the opposite of what was intended. According to Coleman Luck, a Christian who worked for Universal in Hollywood at the time, it did more damage to his evangelistic attempts to love his coworkers and community and introduce them to Christ than any other single event at the time.

This was so long ago that many have likely forgotten the story. We as evangelicals were scuttled from one panic-fueled protest to another over the years in order to "fight the good fight" and "win the world to Christ." Looking back I just am not sure that these boycotts of Disney, AT&T, Universal, MTV, Microsoft, Burger King, Ellen, JCPenney, Old Navy, Nutrisystem, and many other companies and groups actually did was was intended. I have yet to meet anyone who has come to Christ as a result of a corporate boycott. Perhaps it has occurred, but I have yet to see it.

What was the actual win?

"Well...they knew where we stood on issues." Okay, I get that. "They" being the decision-makers at such companies and organizations, I presume. I still am not sure if this had any real impact.

In addition to such cultural boycotts and stances the church also, at least seemingly, married the state in many areas as the syncretistic union of faith and politics occurred. In Julie Roys recent interview with Coleman Luck, he states "Two-thousand years ago, Jesus Christ said that His Kingdom was not of this world. His followers have been trying to prove him wrong ever since.”

I wonder of we are actually aware of the power of panic in our lives and in our churches.

Panic is a tool used to get groups to do what is desired. It is a true motivator, but a fear-based motivator. When panic is fueled, anger grows. Have you encountered anyone living like that? Do you know anyone who is seemingly so overwhelmed with fear that they are perpetually angry. That anger is strengthened by the talk shows they listen to, the podcasts they subscribe to, the news shows (which do not actually share the news) where talking heads declare the worst that is being done by others, and the echo chamber they live within. Sadly, sometimes these panic-fueled moments are exacerbated by the church and even by church leaders.

This is not to say that Christians should be living with a "Pollyanna" worldview defined by weakness and overt passiveness. Yet, just as I was enthralled as a young person by the loudest voice in the virtual room that used warnings and scare-tactics to grow an audience, so too can it happen now. Age alone does not bring along maturity. Only Christ can truly give us mature spirits.

We surely should be active in our faith. We must be fulfilling the commission given to us by Christ. We actually do not have the privilege of opting out of the expected lifestyle and worldviews scripture proclaims. Yet, we must not slide into falsely believing that God needs us, that God is so thankful we were finally born so that we can right all the wrongs in the world, that our strength is in our numbers, our volume, or our political acumen. We must remember that to live as Christ lived is to understand that coming as a servant, a suffering servant, is key. Sure, Christ was righteously angry at times and when he turned over of tables in the temple, it was pretty amazing, but many Christians seem to live as if that is the goal - turn over as many tables as you can and claim your anger is righteous when in fact...it is just anger.

There is power in panic and as sheep of the Good Shepherd we must be sure we are listening to his voice. Otherwise the loudness of the sheep rustlers that are everywhere will continue to influence us into actions that not only embarrass the Good Shepherd, but fragment the flock and lead us to losing our witness.