davidtarkington.com
Home Archives Subscribe
What Is Happening in Ukraine Matters To Us All
Talking Honestly & Biblically with Children About Death

What If Your Church Was the Last Church Family You Will Ever Have?

The local church is often considered to be a family. Most churches, mine included, use words to describe, promote, and explain the value of being a member that are good, right, and even biblical. Words like "family," "life," and "community" come to mind. Yet sometimes it seems (my opinion here) that those terms are often only used because they are trendy, marketable, and useful in advertising programs in an attempt to grow the church numerically.

There is nothing inherently wrong with marketable phrases and graphics. Our church uses such for sermon series, mid-week gatherings, and special events just as most evangelical churches do.

However, just using the right terms does not mean that the church actually is creating or fulfilling that which is promoted. "Come to our church. We are friendly, welcoming, and love people" is a wonderfully kind invitation, but just saying those words does not automatically turn every member into an outwardly focused, welcoming, happy-to-be-around person. And at this point, you are likely thinking of the saint in your fellowship who embodies the term "curmudgeon." Just don't sit in his pew.

Most recently a group of friends from church and I have been working through a teaching series by Del Tackett titled "The Engagement Project." One of the convicting themes that resonates throughout this series is the command of Christians to truly love our neighbors and as believers in a local church to love one another at a level often never experienced between the morning prayer requests, coffee and doughnuts, and the 45-minute biblical lecture known as a Sunday School lesson...much less what occurs in the corporate worship gathering.

The Growth of the Formers

Not every church experiences this, but those similar to ours (suburban church, historic heritage, former hey-days of high attendance, changing community demographics, etc.) often have revolving doors of church membership. Maybe due to this, many newer churches do not even bother with official membership?

At funerals of long-time members and even at community events, I notice a large group of formers in the room. These are former church attenders, former church members, former event participants, former Sunday School members, etc. They have been disconnected from our church for so long that most conversations I can have with them center on common stories from decades prior rather than current life stories.

I am not angry about this. I think I am beyond being disappointed or surprised. Maybe I'm mellowing in my old age, but this large number of formers from our church family just is.

Of course, it could be said that our church just needs a better membership philosophy and to be more biblical in this area. That is likely true, but I am not sure that would actually fix the majority of the issues revealed. It certainly will not heal past rifts.

What are these formers doing now regarding the local church?

Some are members of other local churches. Some found new places of service and moved to a church closer to their homes. Some simply do not attend anywhere. Perhaps they stopped once their children graduated high school and then just slid into a new schedule. Some are simply spiritual orphans without a faith family and in many cases, they either do not care or realize how dangerous that is.

My conviction is that far too many of the formers in our community just slipped away, did not show up for a few weeks, then were basically forgotten until seen again at a funeral or community event.

It hit me last night as our group was meeting and discussing the value of deep friendships with a small group of fellow believers. We discussed the need for relationships with others that can survive ups and downs, that lead people to be there for one another, that create a sense of security where isolation is not an option, and where faith grows deeply.

I don't think this type of connection can be created in a large group. I do believe in the group philosophy that churches have used for generations, whether groups are called Sunday School, Small Groups, Connect Groups, Life Groups, or something else. It should be noted that just because you creatively label your groups the desired life-long connections are not automatically the result. Disciple-making takes place in the "one anothers" of life and more often than not in groups where everyone is known and loved.

Is that the missing element? Perhaps. 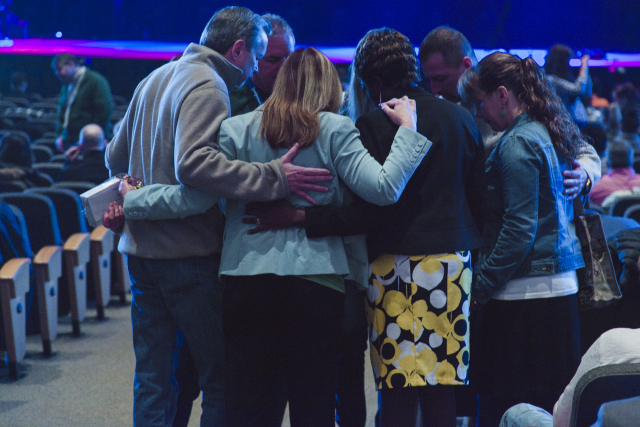 There is much to be done in this regard. It could entail a restructuring of group strategies. It likely will require an adoption of a new scorecard for the church where just cramming as many in the room as possible is no longer viewed as a win.

We know this, but our marketing-motivated, big-is-always-better cultural reality makes this so very difficult. This is not only difficult for pastors who continually are fighting the messaging that they are not good enough, but also for the church members who desire to be part of the biggest, most significant church in the community.

The Last Church You Join

What if when people joined a local church they truly believed that unless God were to call them into full-time vocational ministry, the church were to commission them and send them out to plant a new work, or some unforeseen and uncontrollable life issue were to happen, that the local church they joined would be the last local church they would ever join.

It is family they say and family shouldn't be forsaken and exchanged for a new one (Yes, I know that happens outside of church as well. It is sinful then, too.)

I am not referring to cheap church membership that asks nothing of members. I am not speaking of the type of church membership where one's name is simply put on a roster and a mailing list to be held in perpetuity so that one's children can get a free facility for an upcoming wedding or a large room for a future funeral.

I mean "What if the local church member joined a fellowship that truly became family, not a spiritual version of a local community club?"

It would be messy. Doing life together is difficult.

Maybe that is why so many church family relationships fail to go deeper than the surface?

Maybe. I don't know. This is just a thought that came to mind last night as I was praying and asking God to lead our church to engage well and love as he loved us.

There is more I am sure. May we see it come to fruition.