This is Part Two of a four-part series reflecting on events that occurred at the Southern Baptist Convention Annual Meeting in Anaheim.

Sexual Abuse in the SBC

As most likely know by now, messengers to the SBC in 2021 voted to create a Sexual Abuse Task Force (SATF) to address the decades of abuse revealed in an article by Robert Downen of The Houston Chronicle in 2019. The abuse has been horrific, though some seek to downplay it due to the low percentage of Southern Baptists who have come forward revealing such abuse over the years. Downplaying sexual abuse is wrong and even if only a handful of people have been abused, the resulting inaction of member churches, by and large, and the shuffling of accused and guilty leaders to other churches without warnings is sinful and abhorrent. I have written about the sexual abuse prior here and the resulting SATF report here.

Guidepost Solutions was hired to investigate the Executive Committee and the SBC regarding policies and practices related to sexual abuse. Their report is featured in full here.

At this year's meeting, survivors were present distributing ribbons as a symbol of support for sexual abuse survivors. Many of these survivors have been asking for years that the SBC do something to address and provide protection for others. 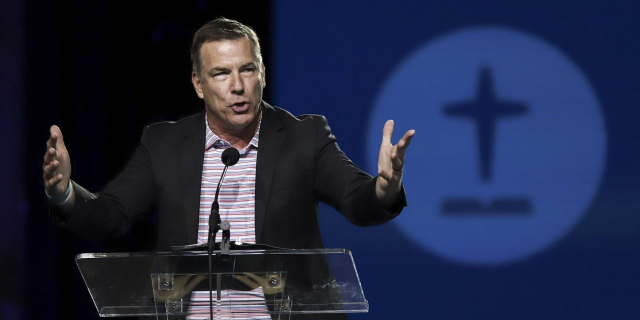 Bruce Frank, Chairman of the SATF. Photo by Sonya Singh.

When the time came for the SATF to bring recommendations to the messengers, the man of the hour was Pastor Bruce Frank, pastor of Biltmore Baptist Church in North Carolina, and chairman of the SATF. Pastor Frank gave one of the most important, clear, and passionate speeches regarding the report. Had he dropped his name into the presidential pool, he likely could have won then on the first vote.

The SATF brought two recommendations. Both were almost unanimously affirmed by the messengers.

Recommendation One: That the messengers of the 2022 SBC approve creation of an Abuse Reform Implementation Task Force (ARITF) having responsibilities to study best-practices for how to implement recommendations from the Guidepost Report, assist SBC entities with recommendations, provide a fixed SBC resource in abuse prevention, crisis response, and survivor care, and work with the SBC Credentials Committee to evaluates churches acting in an inconsistent manner regarding the SBC's stance on abuse. This ARITF is also to help provide independent firms for investigations when needed.

Recommendation Two: That the messengers of the 2022 SBC approve the creation of a Ministry Check site that catalogues leaders credibly accused of sexually abuse.

Both recommendations were overwhelmingly approved and are viewed as strong, positive steps to address our past issues and ensure future steps are right, helpful, healing, and survivor/victim-intentioned. The funding of this is provided by Send Relief, rather than from having to take Cooperative Program funds from elsewhere.

Just prior to the gathering of the SBC, Guidepost Solutions tweeted a pro-LGBTQ+ pride message. To be clear, this Guidepost is NOT our annuity board - that is Guidestone. It is also not the publisher of the devotional magazine many grandmothers have read for years. Guidepost is a secular company that specializes in internal investigations of large organizations in regards to sexual abuse.

Many declared their disappointment with Guidepost's stance. I am one who was disappointed, but not surprised. It no longer surprises me when non-Christians act and tweet like non-Christians. Nevertheless, the real concerns centered around the spending of Cooperative Program monies for Guidepost's services. That is a legitimate concern.

Nevertheless, the details of the report in hand. They could not and should not be ignored simply because some believed Guidepost was an illegitimate investigator due to their secular tweet and attempts to appease the moral revolutionaries. Ultimately, the report from Guidepost was viewed for what it was and the recommendations taken. We were reminded that often throughout history God has used pagan nations and ungodly kings to discipline and bring judgment upon his own people.

Thankfully, the SBC did not get side-tracked and moved forward with the SATF recommendations.

A motion came to the floor to disband and defund our ERLC. This was not surprising as it seems each year such a motion, or at least talks of such abound.

The ERLC mission is stated clearly on their website (erlc.com)

The Ethics & Religious Liberty Commission is an entity of the Southern Baptist Convention. The ERLC is dedicated to engaging the culture with the gospel of Jesus Christ and speaking to issues in the public square for the protection of religious liberty and human flourishing. Our vision can be summed up in three words: kingdom, culture and mission.

The ERLC does receive funding from our Cooperative Program dollars, though minuscule in comparison with our mission agencies and seminaries (rightly so.)

So, why does this call to disband the ERLC keep coming up? In my opinion, it goes back to the ERLC's stance against Donald Trump in 2015 due to his moral indiscretions. This was centered in then President of the ERLC, Russell Moore. Moore resigned in the spring of 2021 and is no longer a Southern Baptist.

With syncretism revealed among many Southern Baptists regarding political party and personality preferences and biblical Christianity, Moore continued to anger some in the SBC with his strong stance with sexual abuse survivors and the push to do better within the entities. There is more to the ERLC than just this and some continue to feel that the most liberal an culturally-influenced group in our convention is this entity, the reality is that ERLC leaders are bible-affirming conservative Christians serving us well on the front-lines of the culture.

Former ERLC President Richard Land shared as a messenger that he believes now, more than ever, we need the ERLC.

While there are likely no Southern Baptists who agree with every statement and step the ERLC has made in recent years, it is clear to me at this time as Roe v. Wade is hopefully soon abolished, that Southern Baptists will need ERLC insight and helps as the abortion battle goes back to each state capital.

The messengers did not vote to dissolve the ERLC. I doubt that this is the final time such a motion is proffered.

Famed pastor and author Rick Warren joined us at our convention. It is unclear if he was a messenger or just a guest, but his church, Saddleback Church, has been SBC since its founding. Warren's church has grown to be one of the largest in the world and one of the most influential. The numbers of members, ministers, mission teams, and many other things launched from the Purpose-Driven Saddleback Church is astonishing. Yet, recently Saddleback ordained some women as pastors.

That became the issue. 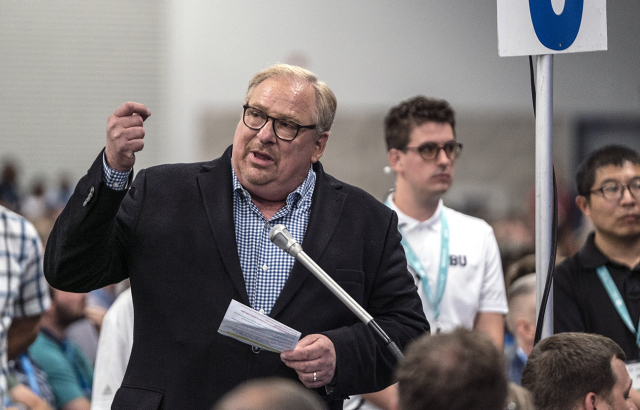 Warren arrived and spoke to messengers from a microphone on the floor. He was given more time than any other speaker, but many were interested in what he would say. He categorized his statement as a "love letter" to the SBC and prefaced it as likely his final statement as he would most likely not be invited back. Warren is a master communicator. As he soon began sharing his "love letter" it was filled with his and Saddleback's many accomplishments. Soon after he stepped away the memes mocking his self-focused speech began popping up on social media.

What may have been anticipated as a moment of clarity did not provide any and actually may have harmed some relationships.

Warren is retiring from Saddleback and has introduced his church and the world to his successor. The Saddleback site states that Andy Wood will be the church's new Senior Pastor. His wife Stacie is introduced there as well. Pastor Wood comes from an SBC church and he needs our prayers as he steps into this influential and shepherding role for the Saddleback congregation.

Our statement of faith, the Baptist Faith & Message (2000) clearly states that the office of pastor is for men only, as defined in Scripture.  It should be noted that not every cooperating SBC church affirms, nor has been asked to affirm the 2000 edition of the Baptist Faith & Message. Some affirm the 1925 version. Others the 1963 version (compare them here) while others affirm older statements.

This caused many to state the church should be disfellowshipped (The SBC way of removing a church.)

The motion to disfellowship Saddleback was made in 2021 and yet, the Credentials Committee chose to wait another year to address it following the Warren speech.

Now, the discussion among many is about the title, office, calling, and biblical requirements for pastors. Some are disconnecting the term from some roles and a number of SBC churches have women serving in children's, youth, or other areas with the title "Pastor" added to their specific area, but are not ordained elders of the church.

Words matter, or so we say, and that's why there is now a conversation continuing in-person and online over these terms.

Perhaps it is due to the fact we have so loosely used them in the past that words that mean much are seemingly not that important to some.

I believe the Bible is clear that the office of pastor/elder/bishop is identical and there are no added words like "lead, student, worship, etc." before the title of pastor. One problem that is now surfacing is the myriad of SBC churches who have deacons who functionally serve as elders. That is as wrong as ordaining women as pastors.

I believe this is a huge problem. This issue is not one that will just go away. The church I am honored to pastor holds that men alone may be ordained as pastors (regardless what other qualifying title is placed before the term pastor.) We also believe that women have vital and essential roles within the body and their giftedness and leadership ability should not be overlooked or ignored. Women must not be looked at as secondary members of the local church. Our church has women serving on our leadership team, but they are not elders, not pastors, and are not ordained. This does not lessen their importance to our team and our family. This does not minimize the responsibilities they hold within our church. Leaders who silence the voice of the women within the family and see their service as secondary do a disservice to the body and to the individual members. However, it is not within the prerogative of the church membership or leaders to circumvent biblical guidelines and requirements for pastors/elders/overseers. This is our conviction and our statement of faith states it clearly.

The Credentials Committee will be faced with this issue again next year if not in coming months during the meetings of our Executive Committee.

I imagine Saddleback Church will likely walk away from the SBC, but even if not, issues of clarity remain.

Ultimately, these types of questions will not be solved or primarily discussed on the SBC annual meeting floor, but in local churches, local associations/networks, and within state conventions.

Even so, I will not throw away all my Purpose-Driven material as there are some things in the books that are helpful. And...I really do want a tour of Rick Warren's amazing library one day.