This is Part Four of a four-part series reflecting on events that occurred at the Southern Baptist Convention Annual Meeting in Anaheim.

Now for the things that filled my Twitter-feed before and after the Southern Baptist Convention annual meeting in Anaheim.

My wife Tracy and I took some vacation days prior to the convention and afterward. Since my wife and I both love watching baseball and since we have this desire to visit every Major League Baseball field eventually, we could not let this trip to southern California happen without going to some games. Thankfully MLB finally did start their season and began playing earlier this year (we were worried for a few weeks) and they appeased us by scheduling the three southern California teams with home games while we were there.

The Los Angeles Angels of Anaheim

First, we went to see the formerly first-place, but recently 13 losses in a row Los Angeles Angels of Anaheim (that name is worse that churches with multiple campuses) play the visiting New York Mets. We were pretty tired at game time since this game was on the day we arrived and the cross-country time zone shift was upon us. Yet, we pushed through (not that we deserve a trophy for that) to get to the game. The very best and most surprising thing about this game was the cost for parking. It was ONLY $10 (less than for a Jumbo Shrimp game here in Jacksonville) and was near the gate. Amazing! I didn't think any team had parking for less than $30 any longer.

Our seats were great - on the third base line. I planned this out.

I get a hot dog at every baseball game - it's a law I believe. My wife normally looks for some type of grilled chicken. The hot dog was a seven out of ten. My wife says "It's a hot dog. They're all the same." I differ greatly with her on this. So far, we have avoided marriage counseling over this hot dog issue.

Overall, the experience was good. Great seats. Older stadium, but with nice amenities. The employees were very nice and we had a nice chat with the lady guarding our section. I do get the feeling that the Angels will always feel like the JV to the Dodgers.

Oh, and one other thing - the free giveaway at the gate was a very nice Angels cap with the founding year embroidered on it. 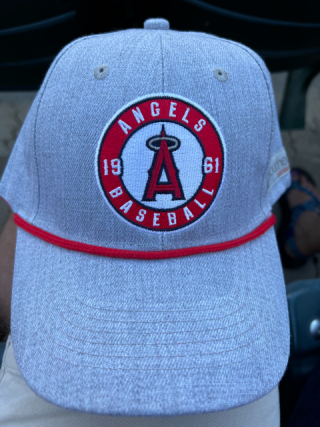 We cheered for the Angels because they were playing the Mets.

We drove to San Diego on Saturday, June 11 to tour the sites and catch a Padres game.

The Padres stadium (Petco Park) is beautiful. It may be one of the top three in the league. The historic Western Metal Supply Company building incorporated into the left field wall is iconic. It reminds me of what the Orioles did in Candlestick. Our seats were once again on the third base side and the view was superb. 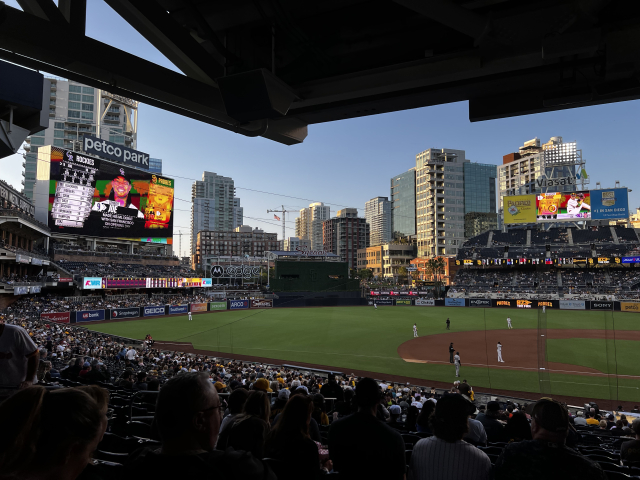 Parking for this game was $50. We drove around a bit looking for another option and while I'm sure some Padres fan could let me know there were cheaper places, we did not find them and I was ready to park. So, I took out a loan and decided not to eat out for the next week and we parked a short distance from the gate.

The hot dog was very good - maybe an eight out of ten. Tracy had some grilled chicken tacos and they looked really good...but it's baseball, so I had a hot dog.

The Padres were playing the Rockies. I'm not a fan of either, so I cheered for the brown and gold.

After the convention ended we stayed a few more days and traveled to Chavez Ravine to watch the Dodgers play the Guardians (that is the new name of the Cleveland team for those wondering why Chris Pratt and a raccoon were suiting up.) 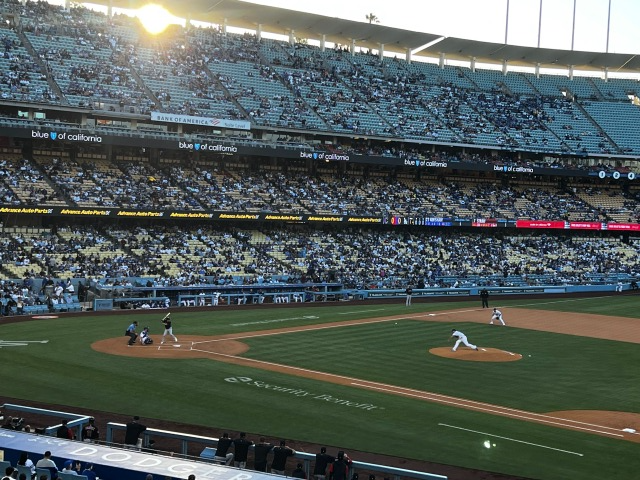 This is an old stadium and the charm is still there. As for food - it was Dodger Dogs. Everywhere. Every spot was serving Dodger Dogs. I splurged (found some change left over after that parking fee in San Dieg0) and purchased the extra large one. Worth. Every. Penny. This was the best hot dog of the tour.

Tracy had some grilled chicken tacos. Whatever.

The parking only cost $30 and we arrived when they opened the lot. I'm glad we did because LA traffic is a mess.

I'm a Reds fan so it's hard to cheer for the Dodgers, but they were playing Cleveland, so I chose the home team.

I was going to write about how the gas prices were high, but that is not news. Gas prices are high. They're very high in California. Our rental car was running low, so I stopped and put $20 of fuel in the tank. That lasted about 3 minutes before I needed to fuel again.

There were more Teslas and other electric cars on the road than I have ever seen. Yet, these electric cars create more questions for me each time I see them. Like, what if I'm driving somewhere and there are not chargers? Where can I get a charge? If the battery dies, do I have to sit there for 30 minutes to an hour for the car to recharge? What if I don't have the time? Oh, I know there are answers to these questions, but I really don't want the answers. I just want to complain about this shift from earth-killing, environmentally unsafe gasoline-driven vehicles to Duracell-powered go-karts with iPads for dashboards. They are cool, though.

Southern California is having a heat wave. They said so on the news we were watching in our hotel room. Heat wave there means 85 degrees with no humidity and the need for a jacket at night apparently.

The weather was excellent for these Florida folks. When we arrived back in Jacksonville we were greeted with the amazing humidity and heat and longed for the Southern California heat wave.

In-N-Out Burgers are so good. Get a Double-Double Animal Style. It's worth it. Better than Whataburger? Not sure and don't care. I just wish they'd open one up here in Jacksonville. 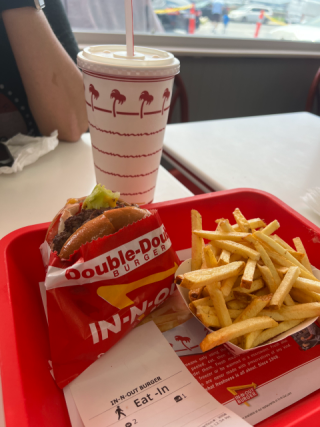 If you're touring a city, get a GoCity Pass. It was worth it and took the frustrations of planning each day without help away. We purchased a pass for San Diego and took the harbor tour and visited the San Diego Zoo. In the LA area, we toured Warner Brothers Studios, toured SoFi Stadium (amazing and totally worth it,) visited the Santa Monica Pier, and took the Big Bus Tour through Hollywood. We also were in the studio audience for Jimmy Kimmel Live! It was the first time I had watched a full episode of his show.