How God Used Numerous Churches (Ours Included) for His Glory in Jacksonville, Florida

A number of years ago a friend serving as an interim pastor at a church in our city reached out to me to see if our church would be open to adopting this aging and struggling church. We met and after a few discussions with church members in the church we agreed to come alongside in a foster-church relationship. This allowed the church to remain autonomous, but gave the authority over to us regarding finances, special events, renovations, and pastoral leadership. It was intended to be a temporary relationship from the beginning with the understanding if at any point either church felt the relationship was not helpful, it would cease.

Truly, the smaller church was struggling in numerous areas. They had recently had a pastor forced to leave due to moral failure. Finances dropped. The property had been impacted by storms, with numerous trees down in their back lot among other things. A number of initial shifts were instituted to allow them to be better stewards of the small amount of finances available. With funds offered for the replant through our Florida Baptist Convention, more money and resources offered by our church, numerous steps were taken to renovate facilities, repaint the worship area, install computers and WiFi in the offices, trim trees, and a number of other things, the church's needed facelift was coming along.

Pastoral leadership was stronger as the pastor serving as an interim remained for a time before coming to our church to help with other campus launches. God provided a young man to serve as pastor of this replant quickly and solid, Gospel-focused, biblical preaching continued. God was doing a work here.

Change is never easy and as slowly as we sought to institute needed changes, there remained challenges. This type of shift is never easy and over time some tragic things occurred in the church family that made it even more difficult. The two persons of peace that were seeking to help lead the congregation into this new, healthy model were deacons in the church. These faithful brothers were God's men for this church at this time. Yet, one was tragically kidnapped from his own home, thrust into the backseat of his car as the thief sought to escape police. Tragically, the chase ended in a car wreck and our deacon died days later. Our one remaining deacon in the church later succumbed to cancer. This grievous time was deeply felt by all and without these lay-leaders in the family keeping the focus on what we were seeking, it soon became clear that our partnership was no longer welcome.

Someone in the church family contacted an individual who would represent the congregation and ultimately asked us to leave. We did. It saddened me and hurt our campus pastor greatly. Yet, it was clear God had closed this door for our partnership. Thus, we dusted the sand off our feet and walked away.

Then, one month later in March 2020 the world shut down.

The church hired an interim who is a godly man. He served them well, but would not stay long as he would be transitioning to seminary. Since the demographic of the remaining church membership was older, when other churches were beginning to meet in person again, they could not.

It saddened me to think that this church would do exactly what I had warned them they would eventually do if nothing changed. They would close their doors and a gospel witness would be removed from the Mayport area of Jacksonville, Florida.

Yet, a number of months ago I heard that a sister church in our city, River City Baptist Church led by Pastor Bryan Samms had been contacted by this church. They were desiring to give their property over to RCBC so that a new work could be launched there. River City Baptist Church was connected with this closing church after Bob Bumgarner of First Coast Churches was contacted. The smaller church had come to the point that Ed Stetzer and others often speak of—when the pain of change is less than the pain of remaining the same. Bob Bumgarner was able to connect the church with Bryan Samms and River City Baptist. And...as they say, the rest is history.

I was amazed. Bluntly put, I was shocked.

This was what I had prayed would happen. I contacted Bryan and told him a bit of our story (the good and the challenging) and told him how excited I was for them. I truly believe that God used our time with this church to prepare them to be ready for what now is finally happening. Our church has no connection with the new work, other than as a sister church seeking to see God move greatly in our city.

But here's where it gets more incredible. The church planter who is launching this campus that will become Hope Church Mayport went through Send Network Assessment with us earlier this week. He and his wife are gifted, called, and the right people for the time. I am so glad to see what God is doing in the Mayport area.

So, what was Oak Harbor Baptist Church will be Hope Church and God is doing and will do a great work in the Mayport area. I'm humbled to think that God used us, even in a small way, in this great story. 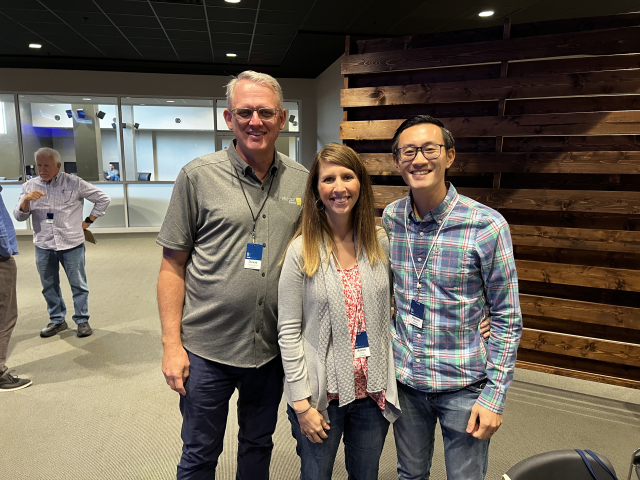 I implore you to pray for Pastor Aaron Chan and his wife Annie. Pray for River City Baptist Church and Pastor Samms as well.

I am thankful for our network in this area, First Coast Churches, our Florida Baptist Convention, and our relationship with Send Network that reminds us that we don't pastor alone, we don't plant alone, and we don't serve alone.